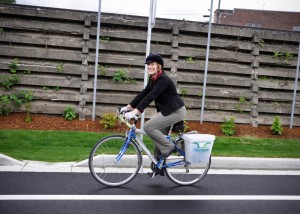 A 2012 version of this post appeared on this blog. I updated it in 2014 for the Washington Bikes blog. This is yet another light update with some “as of 2016” notes.

The way I used to tell the story of  how I started bike commuting, it was an infrastructure story: I started riding because the city put a bike lane in front of my house. Short, sweet, simple — and grossly oversimplified.

Granted, infrastructure and other visual cues are incredibly important tools to build bicycling — perhaps more so for women than for men because of the greater attentiveness to possible risk that shows up in studies of women across many realms.

The bike lane certainly worked to suggest the idea. I bought my house on a bus line to provide transit access, I had walked the 3.5 miles to work a few times, and I occasionally rode my bike for fun on weekends. The bike lane cued me to put all that together and try biking to work. Infrastructure does matter to help people start biking on city streets — and particularly infrastructure that provides true separation such as a protected bike lane or separated trail.

But when I started unpacking the invisible bag that I carry with me through life I found many other factors beyond infrastructure that made it possible for me to get on two wheels and stay there.

If the factors below seem like a really long list, that’s the point. If you hold privilege in this world you take a lot of things for granted that others don’t have. They can’t get the same things without thinking about it and working to overcome barriers you’ll never notice because they don’t exist for you. (You don’t need to feel personally guilty — it’s not that you deliberately set up this system — but you do need to do something about it.) If someone else gaining access to something you’ve never had to question feels like you’re losing something, what you’re saying is that you wouldn’t want to be treated the way they are. Watch this very short video and think about your answer to the question Jane Elliott poses.

A list of the advantages I have thanks to privilege (primarily arising from my race and socioeconomic status — and my economic advantages are generations in the making) that made it possible for me to start bike commuting:

When Washington ranks as the #1 Bicycle Friendly State in the US (a spot we’ve held since 2008), it’s based on the League of American Bicyclists system of looking at 5 Es: Education, Encouragement, Engineering, Enforcement, and Evaluation.

In our office and in the offices of many bicycle advocates across the country you’ll hear discussion of another E: Equity. The League has begun to embed questions related to equity in categories such as encouragement, for example, asking if a community has rides or programs designed to encourage people who are underrepresented in bicycling. Equity, diversity and inclusion continue to be challenges in the world of bike advocacy and active transportation.

In your city, in our state, and in our nation, we need to examine our transportation systems through an equity lens to see the effects of disparate access to many kinds of resources. Owning and driving a car has long been a symbol of personal financial success — how about looking at access to everything it takes to ride a bike?

[Tweet “We need to examine our transportation systems through an equity lens. #MoveEquity #bikes4all”]

[Tweet “After reading this I’m pledging to work on bike equity. RT if you believe in #bikes4all”]

Origins of the post: In September 2012, about a month or so after I became the executive director at Washington Bikes, I delivered the keynote address at a conference in Tacoma on Equity and Health in Transportation, put on by the Seattle-King County Public Health District. I wrote a post on my personal bike blog, Bike Style Life, to capture some of the story I told in that speech. I then updated it for the Washington Bikes blog, having realized a few more ways in which I have privilege. Since I expect to keep learning I’m guessing it will be worth revisiting again in another couple of years.