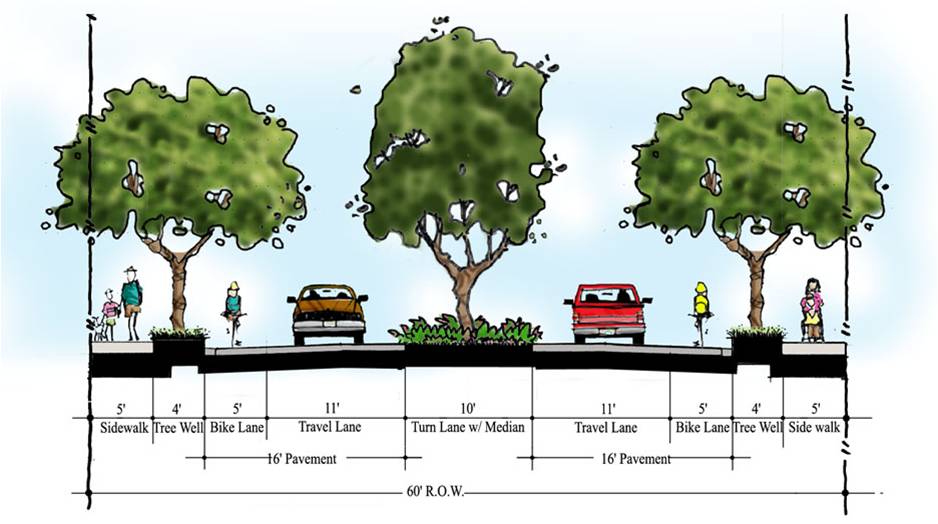 Complete Streets aren't "streets for bike riders and pedestrians." They're streets for everyone.

This post that you should share with all your friends via email, Facebook, Twitter, and personal conversation in (gasp!) real life was inspired by several influences. I’m modeling very directly on the first post so a shout-out to Anna North at Jezebel for providing inspiration and an outline to follow. Herewith, my source material, which in addition to lots of riding time includes:

What makes a stranger on the street late at night frightening? Fear of the unknown. An inability to predict whether that person will do something that will endanger you. So be predictable. Be trustworthy.

That is, follow the rules of the road. They apply to you whether you’re riding, driving, or walking.

Riders, if you would find it alarming to ride near a driver who keeps swerving his/her car in and out of the lane, don’t duck in and out of the parking spots and sidewalks alongside the street. You’re surprising, unpredictable, and dangerous.

Walkers, if you would agree that a driver shouldn’t abruptly drive a car up onto the sidewalk, you might want to rethink abruptly stepping out into the middle of the street at a point where it’s illegal to cross.

In the Jezebel post, author Anna North points out how creepy it is to walk too closely to someone. The same goes for creeping along in a vehicle behind a rider for a long time, at least for me personally.

I can tell when you’re waiting to have room to pass me safely—thanks for doing that!

But if you just idle along behind me block after block I’m wondering why you don’t exercise your legal right to pass me at a safe distance. I think about whether you’re trying to follow me for some reason that should worry me. This is like tailgating and you know how annoying that is for you as a driver. Don’t tailgate bikes either.

The “too close” wording applies to passing as well as following for any number of reasons. Your mirrors stick out. I have to swerve around glass in the street you can’t see. I’m avoiding the door zone for the parked cars to my right. There are all kinds of reasons that crowding me makes for dangerous conditions.

Even if you won’t be hurt when you hit me, just think of the paperwork and the effect on your insurance rates. And it takes far longer to deal with the aftermath of a collision than the 15 seconds you might lose waiting for me to get through the intersection before you turn.

Announce Yourself—but Not with a Honk!

One rider passing another should always sing out, as the Bikey Face post makes eminently clear and as I ranted about a bit in Bike Commuting Manners: Is a Smile or a Nod Too Much to Ask?

Just as a driver doesn’t know what hazard I might need to avoid and thus should leave me some room in which to maneuver, a passing rider doesn’t know what I’m looking at either (and probably wants me to spot the glass or pothole in time to avoid it so he/she can miss it as well).

When you go buzzing past me and the first I know you’re there is when I feel the wind of your passing from six inches away, you freak me out. Don’t do that.

Drivers, unless you’re in a hybrid on electric mode I know you’re there. Honking is not only unnecessary, it’s dangerous. It startles me, which might lead me to swerve in front of you. This will be bad for both of us.

Show that Your Intentions Are Honorable and You Are Trustworthy

The next three items in the Jezebel post relate to the situation in which you want to establish a relationship with another person in a shared space where your proximity might feel dangerous unless you behave in a way that shows you’re trustworthy and your intentions are honorable. Anna’s advice is to make a phone call (to show you’re harmless as you walk down the street), just say hello rather than getting more personal, and wait for a better opportunity to talk more.

I don’t want you to make a call! I want 100% of your attention on the street and our interaction.

I don’t mind if you say hi at a red light but I definitely don’t want you yelling things you think of as compliments only because you’ve forgotten I’m someone’s sister, someone’s mother, someone’s daughter.

Assuming you’re not trying to hit (or hit on) that person on a bike or that driver, signal that through your behavior by behaving normally and doing the expected rather than the unexpected, the polite rather than the rude.

Listen to People Who Ride, and Advocate for Them

I’m glad Anna North’s piece finished with a call for positive action instead of a “we/they” mentality. We all have a vested interest in safer interactions on the street regardless of our form of transportation.

This doesn’t just mean drivers should advocate for bike/pedestrian infrastructure, mind you. It means all of us can and should expect a transportation network that functions for all types of uses.

This includes getting a bike from its point of manufacture to the local shop where I buy it so I need to care about safe movement of freight.

It means the experience my friend Betsy had when she couldn’t move fast because she was recovering from back surgery and a driver didn’t want to yield to her and her husband in the crosswalk.

For those of you who don’t think of yourselves first and foremost as pedestrians it means remembering that space between your wheeled mode of choice and the door of your destination.

You want the pedestrians to move in a predictable, channelized space that isn’t in your travel lane so you want them to have complete sidewalks with curb cuts.

If you don’t use transit now, you might bear in mind that someday those of us who are lucky will all reach the age where we should stop driving. If we can’t use transit we become victims of our tunnel vision about transportation modes, as my dad did when we finally managed to get the car keys away from him and make the streets safer for everyone else.

If you ride a bike, you care about the quality of street surfaces for a couple of reasons. #1, we are our own shock absorbers! #2, a driver wrestling a vehicle around potholes and obstructions is a driver who can’t pay as much attention to our presence on the street as we’d like.

You’re a property owner who plans never to ride a bike? Awesome that you have that choice; some people don’t. You may be interested to learn that more walkable, bikeable communities have higher property values. I don’t know about you, but I bought at the height of the bubble and I’m for anything and everything that will restore some of my lost property value.