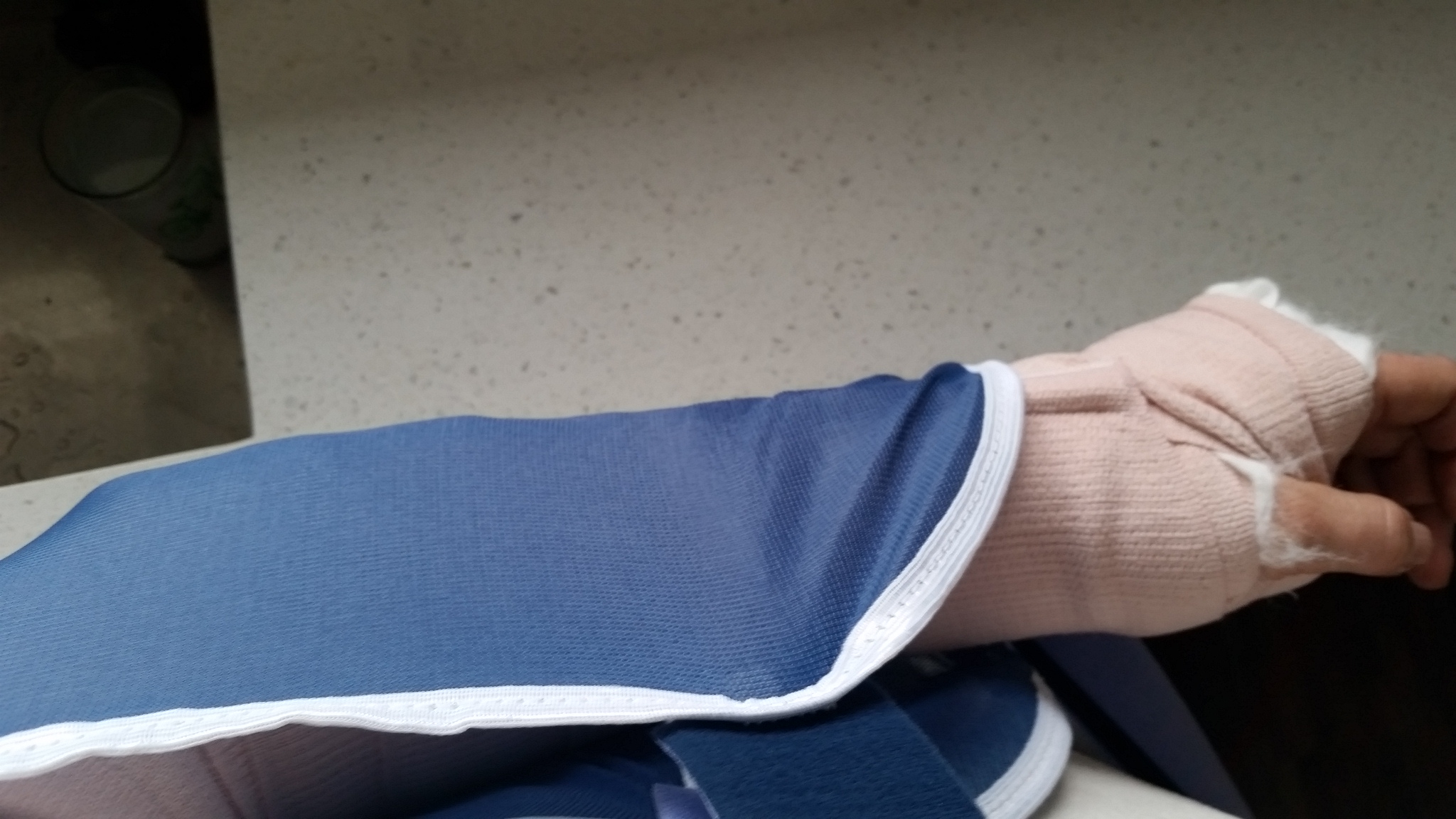 The temporary splint and sling I wore for the first week.

On a balmy Tuesday evening in July I pedaled south along the Elliott Bay Trail en route from a meeting in Seattle’s Pioneer Square to my home in White Center. In a number of places along the heavily traveled multi-use path, the pavement has heaved up and cracked, creating hazards whether you’re riding or walking. And I picked up the broken elbow, scrapes, and bruises to prove it.

I tried to avoid the upheaved pavement but since it runs almost the entire width of the trail and with oncoming bike traffic I couldn’t, really, and the edge of my tire caught. There was that moment of my brain saying, “Oh, no, I’m going down hard.” Then I was down.

And down in a cartoonish fashion, too. Full length on my stomach, arms outstretched, my bike somehow behind me on my back, one wheel still spinning. As a coworker said later when I described the fall, all I needed to complete the picture was a circle of Tweety Birds rotating over my head.

Blood poured out of my left elbow as people stopped to help. I carry cut-up squares of old T-shirts in my pannier that serve as hankies, so I fished one out and held it over the bleeding.

Shortened version of the next steps: People helped me. Sweet Uber driver got me home after offering to take me to the hospital or to stop somewhere to get ice to help with the swelling. A look at the wound in the mirror showed me an elbow that absolutely didn’t look the way elbows are supposed to look, leading to the conclusion that it might be broken. Clumsy bandaging at home + ibuprofen. Drove myself one-handed to the airport, where my husband works as a TSA agent, to wait for him to get off shift and take me to the ER. (We own one car and this seemed the simplest way to resolve the transportation juggling and have the comfort of someone helping me.) X-rays. Closed simple fracture. Irrigation to wash a lot of gravel out of my arms. Couldn’t put stitches in the puncture wound (still bleeding 4 hours after the fall) so got a gauze patch. Splint. Sling. Hydrocodone. Antibiotics. Home. Discovery of a trail of huge bruises all along my inner thighs, including some sort of brifter-shaped that presumably represents passing over the handlebars. (I will spare you a photo of the bruises.)

I have a very limited wardrobe when it comes to things I can get on over the brace. My beloved Nuu-Muus, my usual summer garb, are sleeveless but the high neck means too much wriggling around. I just got one of the new Scoop dresses, which works much better, so this seems like a perfect excuse to order another one of those.

I went shopping and picked up a couple of sleeveless tops I could wear with skirts, because pulling up pants and buttoning/zipping with one hand every time you go to the bathroom is awkward.

In addition, the Robocop brace (or bionic — I haven’t quite decided which) has Velcro straps that snagged all my clothing. For the first week I improvised with napkins and other buffers to protect the fabric of my clothing. I couldn’t use scarves because I didn’t want to snag those either. At my one-week checkup they gave me a stockinette tubing I could stretch over the brace to prevent the snags. Why didn’t they give me this on the first trip?

In a few days the brace comes off and I start physical therapy. I’m a little bit terrified. I have inadvertently moved my arm wrong a few times when I didn’t have the sling constraining my movements, which has led to loud cursing. In one case, some loud comment ensued in a dressing room when I was trying on a sleeveless dress. Sorry, genteel shoppers, but it hurt like you wouldn’t believe.

I figure it will be easier to get dressed, in that I can get things over an arm that’s once again a normal size. But it’s going to hurt and I’m going to be a scaredy cat about doing things that delay healing. Plus the arm is still bruised and somewhat swollen, although the skin abrasions and puncture are healing well.

No idea how long it will be before I get back on the bike. This hasn’t scared me off the idea of riding. In fact, I can’t wait to get out of the car, which is an incredibly inconvenient way to get around Seattle. (Taking transit without my bike would be a two-hour trip each way so I’ve been driving.) But I figure I’ll still tire easily and it will take quite some time before I’m back to my bike-commuting routine in full. Right about the time the fall rain sets in….

My day job involves working for policies and investments that will create safe, complete, accessible networks. New construction is exciting and shiny and has ribbon-cutting photo ops. But maintenance of our streets, sidewalks, and paths also matters greatly for bike routes that work for all ages and abilities.

I’m an experienced rider and still got caught thanks to lack of maintenance that created dangerous conditions I couldn’t fully avoid, given the other bike traffic on the path and the edge conditions next to the seriously cracked pavement.

Report hazards to your local street department. This puts them on notice that they are permitting dangerous conditions. If someone gets hurt in a way that leads to a lawsuit, this will be important. A recent Washington state court ruling put cities on notice about their responsibility to bike traffic; there may be parallels in your state.