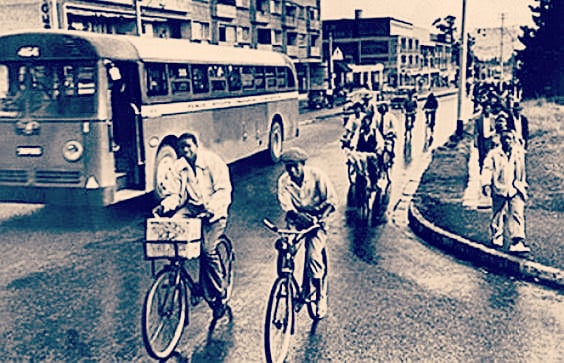 Montgomery bus boycott, 1955, during which Dr. Martin Luther King, Jr. rose in prominence as a leader of the civil rights movement. Image found thanks to Better Bike Share.

Once upon a time in 2012 before I worked as a professional in bicycle advocacy, I became the first person to ride a bicycle on the newly dedicated Martin Luther King, Jr. Way in Spokane, Washington. Back then I wrote, “The size of the crowd despite the pouring rain reflected the importance of dedicating a street named for Dr. King.”

Today on the annual holiday dedicated in his name I read a number of pieces on the topic of streets named for Dr. King, a subject that symbolizes the important of true, deep work for transportation equity. The articles linked below describe political challenges and the reflections of redlining and racist history often emblematic in the location and condition of these streets.

“To name any street for King is to invite an accounting of how the street makes good on King’s promise or mocks it.”
— Jonathan Trilove in his book Along Martin Luther King: Travels on Black America’s Main Street

Remembrance of Dr. King often highlights the things white people are willing to hear but not the deeper challenges he also discussed. Naming a street after him invites — demands — that we examine whether our actions serve to bend the arc of the universe toward justice.

If we benefit from privilege that grew out of past inequities, past racism, we can work to understand the effects on our own lives and seek to use our privilege to improve conditions for everyone.

We can use the street name or the holiday to focus our attention on the necessity of courageous action to change the nature of all our streets so anyone and everyone can feel safe there.

We can ask who is welcomed there, who is not, why, and what we must do to change that for the better. And then we can do that thing, whatever it is.

My ride on that street didn’t come about because the event organizers had thoughtfully invited me as the recent chair of the Spokane Bicycle Advisory Board. It didn’t happen because they had recognized that something called a “Complete Street” should have all modes represented at its opening.

In fact they had arranged for a line of classic cars to drive on the street. That was all. Not even a freight truck, whose driver would also be an appropriate participant for a Complete Street design with a truck turning radius since this street connects with State Route 290, also known as Trent Avenue. While it was “complete” in name, only certain people were officially invited to use it as part of the ceremonial opening.

Since I headed communications and public affairs at WSU Spokane, through whose property the street ran, I knew the details of the event. Since I was a bicycle advocate, I brought my bike to make a point by riding along the street once I realized there were no official plans for a bike presence in the brand-new bike lane. Since I am white, was dressed like a person coming to an important event, and acted as if I were entitled to participate in the event, no one challenged my presence or my actions when I wheeled down the street ahead of the classic cars.

I’d like to think that someone who was black, Indigenous or a person of color wouldn’t have been challenged for riding their bicycle at that place for that particular event. I don’t know that for sure and I’ve learned enough to know I shouldn’t assume. Plenty of research tells us that laws related to walking or bicycling behaviors are enforced against people of color out of proportion to their numbers in the general population, similar to laws related to driving. Dr. King certainly understood and spoke to the fact that the negative effects of transportation investments fall disproportionately on people of color.

It’s worth noting that the only other people on bikes present were the campus security officers who used bikes for their utility and flexibility in running around campus. They knew me as a colleague and thus wouldn’t have acted to stop me.

In case you’re wondering about the way I opened this story, I’m absolutely not equating my actions with those of the courageous people who participated in the Montgomery bus boycott or any other bold action for racial justice. At the time I did it, I thought of it as a small act of modal justice, if you will — making a point about the inclusion of people on bicycles. But I only made sure I got included, not others.

Maybe what you have room for in your life when it comes to racial and social justice is one small act. Maybe you can notice who isn’t included and invite them to participate, if you’re a person with some power in the equation.

Maybe you can use your position power and access to open doors for others that you’ve already strolled through possibly not even recognizing they were doors, or that they were long ago propped open for you but slam in other faces.

Maybe you can ask which street you’re traveling on through life and whether you’re taking the Dr. Martin Luther King, Jr. way.

Naming a Street After MLK Is Easier Said Than Done: By geography professor Derek H. Alderman (@MLKStreet on Twitter), who has spent 20 years examining streets named for Dr. King. “I have found that the nation’s Martin Luther King streets – while seen by some as celebrating the victories of a movement that left racism safely in the past – are one terrain on which a continuing struggle for civil rights has played out.”

What Kansas City Can Learn From Dakar, Amsterdam And Memphis About Naming Streets For MLK: Michelle Tyrene Johnson examined three cities around the world with streets named for Dr. King after Kansas City, MO, named a street for him and voters then reversed that action. “There are still legacies that have been put in public spaces all across this country that are memorials or signals of sexism, racism, misogyny, anti-indigenous aspects. And there is a swing to correct that. And in doing that, there’s a resistance.”

The Other Side of MLK Boulevard: Tanvi Misra examines the economic and social context of the street in Baltimore bearing Dr. King’s name and the way it reflects redlining and “the racially charged decision-making that marked mid-20th century American life.” “For some, it can be a symbol of black pride. But for others, depending on who’s granting access or granting opportunity for the name change, it’s just saying, ‘Here, take this. Be quiet. Be happy. Go away.’”

The Remaking of Martin Luther King Streets: Before the 2018 Baltimore piece, Tanvi Misra wrote about research finding that streets named for Dr. King often are in poorer condition both in terms of the people who live there, economic activity, and roadway condition. “The symptoms of concentrated poverty on some of these streets are familiar. They include shuttered storefronts and cracked pavements, crime and unemployment, and a lack of education and transit options.”

MLK Boulevard: A Snapshot of King’s Dream Deferred: In this 2014 Colorlines piece by Josh Begley focusing on the persistence of racial and economic injustice, they share maps that overlay Dr. King streets on maps of racial distribution in Chicago, New York, Atlanta, and Oakland. “The existence of so many Martin Luther King streets is complicated by the fact that so little of the economic justice that King fought for five decades ago has come to fruition.”

Dr. Martin Luther King, Jr.’s Legacy and Bicycling: How Do We Build a Coalition for Bicycle Justice?: A 2013 piece by Adonia Lugo while she was finishing up her PhD in social anthropology and doing some research supported by Washington Bikes. Her more recent works include Bicycle/Race: Transportation, Culture, & Resistance and Making Bicycling Equitable: Lessons from Sociocultural Research with Sarah McCullough and Rebecca van Stokkum.

Walking While Black: This ProPublica investigative series is a starting point if you’re interested in patterns of pretextual stops and racialized policing of pedestrian and bicyclist movements. I have a longer set of links to share in future. Follow Rutgers researcher Charles T. Brown if you’re on Twitter, too (@CTBrown1911).