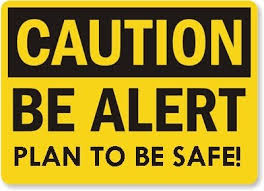 Setting: A separated trail running between the Duwamish River and a corridor thick with truck traffic spilling over from the Port of Seattle, part of my regular route to work.

A row of bushes and trees and an active heavy rail line separate the trail from the road on the west side of the trail. On the east side of the trail, various industrial sites feature the occasional semi tractor-trailer rigs pulling in and out of their driveways. The trail then swings closer to the river and runs by a quiet strip of park that rarely has people there during the morning commute, with the industrial sites now on the west side, separated by heavy fencing too high to climb over. The separated trail ends at a street crossing to pick up the sidewalk on the other side of that busy road.

In my regular commute after a couple of miles on residential streets I come down a steep four-lane road plus turn lane and turn left onto the trail. Yesterday morning I saw a rider turning onto the trail ahead of me from the other direction. The person had a bit of a head start but I gradually gained ground until I rode roughly six feet behind the first rider.

I am not a stealth rider. I carry two bags with various jingly bits, my front brake pads make a terrible rubbing noise when applied that probably indicates I should replace them, I change gears fairly often, I vocalize if I hit a bump. If I’m behind you, you’ll know I’m there.

Through the park portion in particular, there are no observers of what’s happening on the trail. Once the trail comes back closer to the road, the barrier of bushes, trees, and tracks would prevent any driver from being able to stop and help even if they saw something happening to a person on the trail.

For those three miles I watched that figure in front of me, waiting for the head turn that would indicate this other person thought it was a good idea to know who’s behind you on what is essentially a lonely trail with no access.

The head never turned. The rider never acknowledged my presence until we both stood at the end of the trail waiting for the crosswalk light to get to the sidewalk on the other side, at which point I got a brief sideways glance, maybe a half-smile.

The whole time I rode behind that person I kept thinking, “I could lay bets of any amount on the gender and race of the person in front of me and I would win. This is someone who has assumed there’s never a need to think about personal safety.”