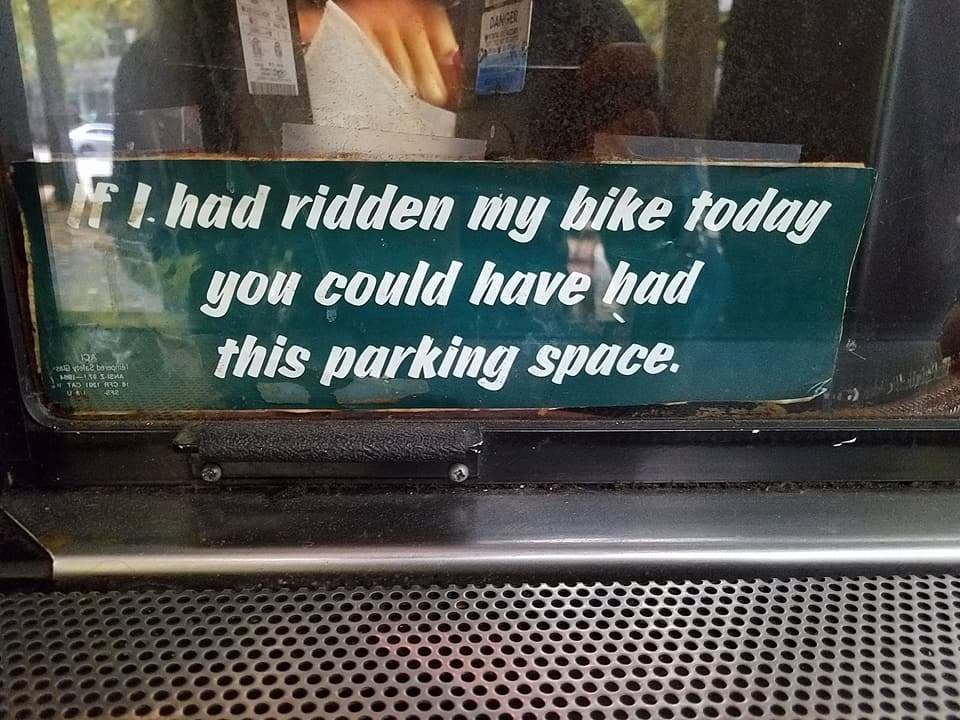 One of the benefits of better active transportation infrastructure for people who primarily drive: We don't take up a parking spot.

In my work at Washington State Department of Transportation, where I’m Director of the Active Transportation Division, I put out an e-newsletter 2-3 times a month. If you subscribe (everyone welcome!) you’ll get two types of emails:

I find so many resources and interesting articles I find it hard to confine myself to just five (hence the +), and the national/international news list often gets pretty long too. I thought I’d share the articles that caught my eye over the last week or two, not all of which fit neatly into an e-newsletter from a public agency but all of which relate to transportation policy. I draw the quoted snippet from the article so you have a takeaway even if you don’t have time to read it.

Sidewalk Snow Clearance Is a Human Rights Issue: “Sidewalk snow clearance is like cycling infrastructure. Small pieces of infrastructure here and there is useless. We need a dependable network of clear sidewalks to allow people to move safely and freely through their communities. ”

The Design Bible That Changed How Americans Bike in Cities: “But standards can also replicate failure. Sometimes, that’s because codified “expert judgment” turns out to be wrong. But it can also be because standards embed value judgments in ways that are rarely examined.”

To Build a Better Bus Lane, Just Paint It: “even if they’re short, cheap, and a little DIY, dedicated (transit) lanes can also do a lot to smooth commutes, and brighten opinions about buses as they do.”

How Slow Lanes Can Speed Up New Mobility (And Save Lives): “…the choice we face here is not an exclusive one – we do not need to slow down the adoption of new technologies. We need to speed up our ability to integrate them.”

The urban design problem that’s killing pedestrians and cyclists: “Many bike lanes and pedestrianized zones only extend for short distances. Most American drivers have yet to fully appreciate that urban streets are to be shared. And even in the best of times, cars and trucks are not good at sharing the road. Vehicle drivers are often moving too fast to identify and respond to pedestrians and bicyclists.”

In 2018, Highest Number Of People On Foot Killed Since 1990: “It’s crucial to do everything we can to protect pedestrians utilizing a broad approach…. Crossing the street should not be a death sentence.”

Research Brief: The happiest mode of transportation? That would be cycling.:  “Based on these findings, Fan recommends transportation planners promote cycling—currently used by about one percent of U.S. commuters—among their citizens and improve transit user experiences.”

Cycling Is Only as Hard as You Make It: “What happens when too many of us take our cycling too seriously is it fosters the delusion that other people couldn’t possibly do what we’re doing, too, and this has repercussions far beyond the insular world of recreational cycling….the notion persists that navigating 21st century life without a car requires a level of athleticism beyond that of the average person, and it mires any meaningful policy discussion in an extra layer of bullshit. ”

Women Who Dare To Bicycle In Pakistan: ” Regardless of where a woman lives, she has a right to move freely, (Zulekha) Dawood says. “This is empowerment. We feel good. We feel free. We can go anywhere.”

Rent an apartment, get a bike: Baltimore developers pitch a new, carless way to live: “(Developer Scott) Slosson said he ordered a fleet of 92 low-maintenance Priority brand bikes “for the cost of building a parking space or two,” which can exceed $25,000.”

The deadly truth about a world built for men – from stab vests to car crashes: “The gender data gap is both a cause and a consequence of the type of unthinking that conceives of humanity as almost exclusively male….  when a woman is involved in a car crash, she is 47% more likely to be seriously injured, and 71% more likely to be moderately injured, even when researchers control for factors such as height, weight, seatbelt usage, and crash intensity. She is also 17% more likely to die. And it’s all to do with how the car is designed – and for whom.”

The Best Medicine for My Climate Grief: “If humans pulled together as if our lives depended on it, we could leave fossil fuel in a matter of years. This would require radical change across global society, and I’m not suggesting it will happen. But it could, and this possibility leaves open a middle path, something between sweeping climate action and an unavoidable planetary collision—a rapid cultural shift, one that we all can contribute to through our conversations and our daily actions. And that’s a very hopeful thing.”

How to get seniors on board with sustainability: “Nostalgic branding has the potential to smooth controversy and foster consensus even around the traditionally divisive issue of action on climate change.”