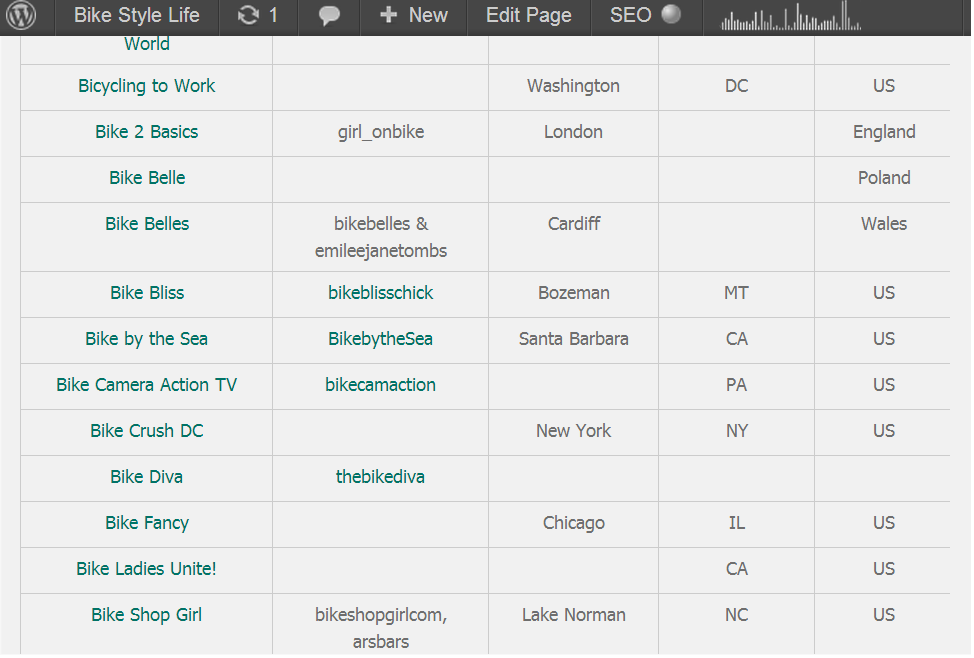 Little did I know when I started poking around for women’s bike blogs to read for inspiration where the quest would take me.

I’d been blah-blah-blogging for a while on a personal blog that roamed across the free-range landscape of my life. Enough of the posts there focused on biking that I thought two things:

a) People who know me and like me enough to read the blog occasionally  may not actually (gasp!) care about the bike stuff;

b) People who care about the bike stuff may not care about the recipes, funny things my kids say (double gasp!), and everything else I was throwing up on the web. (Read that last clause however you like.)

I knew all the bike blogs in my hometown at the time, and every last one of them was written by a man. Don’t get me wrong—love the guys—but no one was providing a perspective that included issues such as getting your skirt caught on the saddle or dealing with issues of personal safety while riding, let alone biking in high heels or how to find the perfect pair of women’s business pants for bicycling.

Fast forward through looking at lots of blogs, following blogroll links, realizing I’d already seen those same blogs linked elsewhere, starting to get systematic just to understand where I’d been, and realizing that I was building an asset that—as far as I could tell—didn’t yet exist.

Who knows where it will take me next?

* Speaking of adding to the list, you can add a comment at the bottom of the list page itself, tweet me at @womenbikeblogs, or send an email to womenbikeblogs-at-gmail.com. I catch up with all of those sooner or later (Twitter is fastest). Then every so often I make a clean-up pass to update the list online.

Slides from my short talk at the National Bicycle Summit SocialMediaPanel-Blogging_Barb_NatlBikeSummit2013_3-4-13.