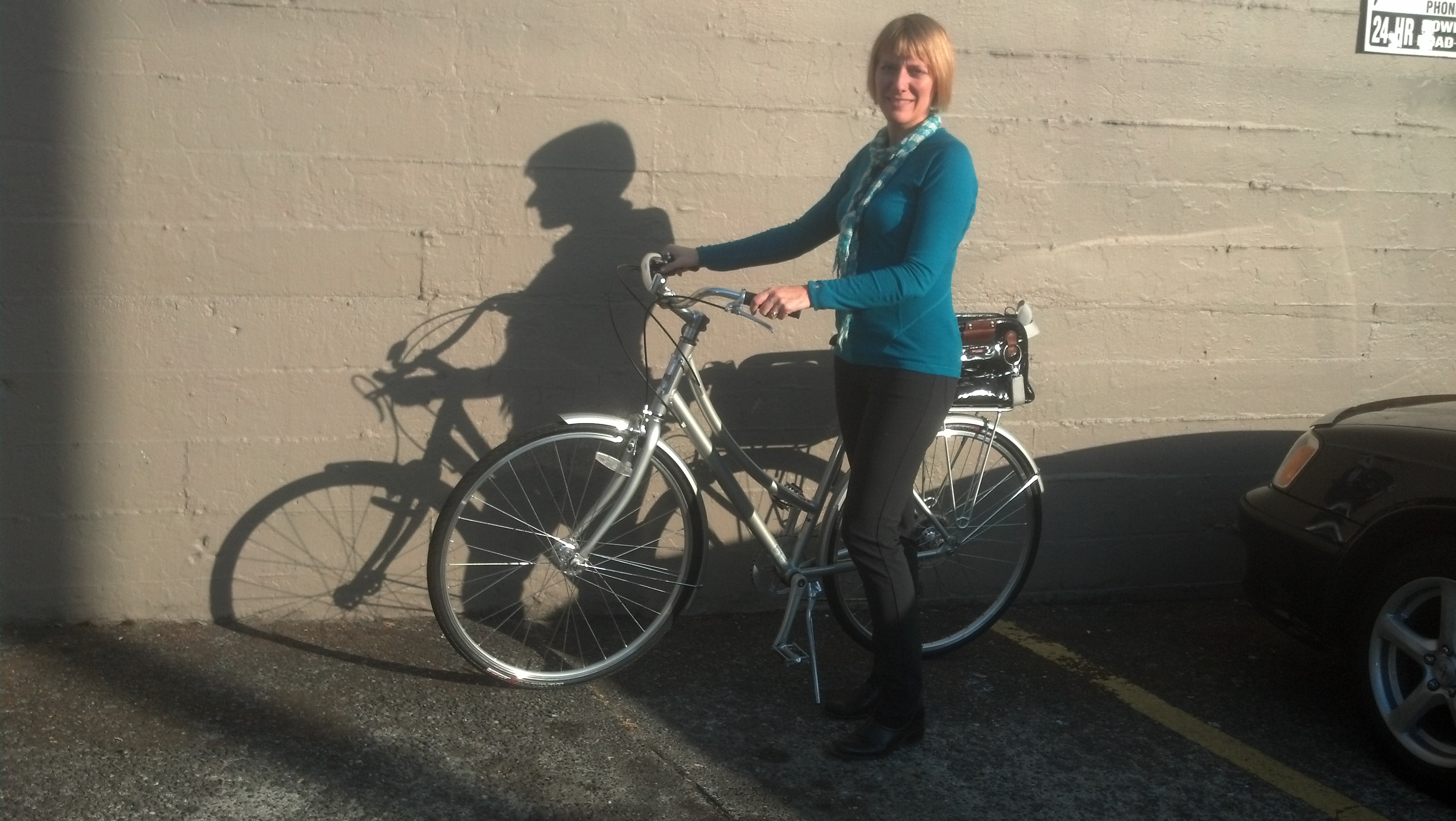 The outfit I wore for my 50-mile ride, but with a different bike--here I'm picking up my brand-new Specialized Globe Daily 02 at Gregg's Cycles.

I didn’t mean to go on a 50-mile test ride of the Outlier Tailored women’s daily riding pant. It just happened. But I’m quite glad it did so I can write a review based on a serious use well beyond a typical commute.

After all, I have been known to wax a wee bit obsessive concerning pants to bike in. What else can you call it when I spend a whole week’s worth of blog posts on my nit-picky criteria, my endless hours of fruitless online shopping, and my unwillingness to spend serious coin to take a chance? As in:

All my posts on wearing regular clothes address “the pants problem,” in a way, as I describe my quest for clothes in that sweet spot between Nordstrom and the bike shop–a spot that so far goes mostly unfilled by either the fashion world or the bicycling world.

Plus, I’m cheap. Or thrifty. So I have up until recently utterly refused to pay a price with three digits in it for a mere pair of pants even after I found a pair of good-looking bike-specific pants.

But when your pants are wrapped around your (ahem) precious parts and you’re riding for miles, they’re not all that “mere,” now, are they?

Last winter I tried on–and loved–a pair of Outlier Tailored women’s daily riding pants at Hub and Bespoke. Didn’t spring for them then, but made myself the promise that I would in the future. When I moved to Seattle to head up the Bicycle Alliance of Washington that became my excuse–after all, I’m supporting an awesome local business that supports my organization, right?

They only had them in slate gray and I really wanted black. So in for a penny, in for a pound–I bought the gray and asked them to order the black in my size. I went from zero pairs of expensive pants to two in the span of about a week.

And I am not looking back. It’s entirely possible this is the best clothing purchase I’ve ever made when you assess the functionality and design of the pants and how long they’re likely to survive as a staple in my wardrobe. I once read the advice to divide the price of an article of clothing by the number of times you wear it to arrive at the real cost. Since these truly are now a daily pant for me, their cost per wearing will drop to pennies in no time.

The first test was when I took them on a trip to New York to deposit the lovely and talented Second Daughter for her freshman year of college at LIU Post. Caught in a truly tropical downpour at a bus shelter on Long Island–the kind in which the raindrops actually bounce a foot or two off the pavement–I was delighted to see the water beading up on the pant leg just as shown on the Outlier site. They dried quickly and I never had any of the nasty clamminess you’d have from waterproof pants with noisy, swishy, rubberized coating–which I wouldn’t have been caught dead wearing anyway. (I didn’t take them because I planned to bike, by the way. I took them because they’re perfect for travel by any mode.)

The fabric, a high-end Swiss technical fabric, has a wonderful feel to it with a brushed inside nap. My mother would describe it as “a nice polyester,” which is not a phrase in which I’ve ever found any truth, but that’s as good a way as any to tell you what it feels like when you touch it.

In a feature the designers probably didn’t go looking for, it also has enough heft and crispness to take a quick fold that creates a cheater hem if you just moved and can’t find your sewing kit, and the fold stays up all day long. This little secret is so convenient I actually haven’t gotten around to hemming the pants and I’ve had them for over two months. I’ll find the sewing kit eventually.

So why the 50 miles, you ask? I went from my temporary housing (a borrowed condo in downtown Seattle) 7 miles north to a cafe to meet up with a co-worker. We then rode another 18 to Woodinville, where we toured Sportworks, which makes almost all the bike racks you see on buses anywhere in the United States and also has some great bike-rack designs (like ones with a rubberized coating so your bike doesn’t get scratched, and the new “Plaza” designed according to the standards of the Association of Pedestrian and Bicycle Professionals).

Take that times two and you have a 50-mile day and a nice long one-on-one meeting with my co-worker during the ride. A beautiful fall day with gentle temps made it a perfect ride along the Burke-Gilman Trail and then the Lake Samammish Trail, but the miles definitely added up!

In the interest of full disclosure of what worked for a 50-mile ride, I had Pedal Panties on underneath. The next day it did occur to me that padded bike shorts wouldn’t have been a bad plan for a 50-mile day, but the comfort level was fine for the ride itself (making this a testament to Pedal Panties as well as to the Outlier pants).

I wore a light SmartWool base layer top and a scarf to keep the chill off my neck, wool socks, and short ankle boots, with a windbreaker for the early-morning stretch. The pants are body-hugging enough that shorts underneath might have made for a weird squeezed-looking spot on my thighs anyway–I probably would opt for the knicker-length Sheila Moon lace liners instead.

I wear these pants everywhere. I wear them to go for a walk, to go shopping on a weekend, out for dinner with my sweetheart. I can dress them up, down, or sideways and do anything in them.

They don’t have a hint of the obnoxious “outdoorsy” design that dooms sooooo many offerings from retailers who assume that someone riding a bike wants to look as if she’s been riding a bike when she goes into a business meeting. They look rockin’ awesome, frankly.

I’m just sorry they don’t make them in a greater size range so that women of substance who ride could have the joy I do. And I want a couple of the color selections back that they had at one time and then dropped (I’ve been stalking their web site for two years).

My quest for the perfect pants has been fulfilled.