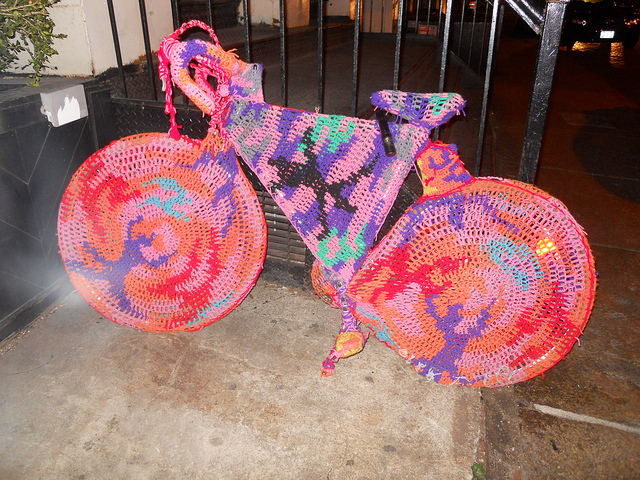 As I’ve gone exploring for women’s biking blogs to put on the big list of women’s biking blogs, I’ve run into some fun patterns. Knitting patterns, that is! Something about biking and knitting must go together, given the number of blogs I’ve found that include both topics.

Whether it’s the calming repetition to be found in both pedaling and knitting or the idea that you can start something, enjoy doing it along the way, and have a sense of accomplishment when you finish–whether it’s a scarf or a bike ride–I don’t know. At any rate, I’ve been finding more time to knit recently myself and a cozy round-up of bike blogs that also cover knitting and other yarn work seemed like just the thing for autumn reading.

I also have quite a few on the list that appear to be defunct (no posts in at least 6 months, sometimes a couple of years) but that still have links to projects, patterns, and other blogs so I figured they were worth capturing. I also know that I have extended gaps in my posting at my personal blog (over at Bike to Work Barb) but that I haven’t stopped, so I give them credit for the possibility that they are once and future bloggers.

This list doesn’t even touch on the vast possibilities if I were to search for bike-related knitting projects but I thought I’d close with this photo of a crocheted bike saddle cover. One of these would do a very pretty job of solving the bike butt problem I blogged about a while back.
Your Turn