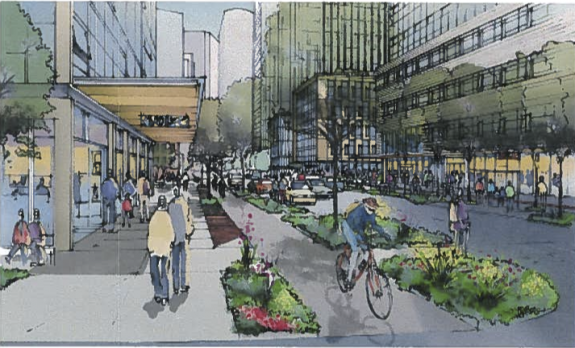 I posted some of my first impressions of Seattle bicycling right after moving here and riding just a little bit around the core downtown area. After nearly six months of bicycling and a few more miles (although not nearly enough) I thought I’d share a few more stories.

It’s a sad statement that I have been riding less since going to work full-time in bike advocacy, but there you have it. (And for those of you who point out, accurately, that it would be possible for me to plan to leave home earlier and put in some miles before arriving at the office, I have only this to say: Bwahahahahaha! Do you leave for work early in your car so you can drive some extra miles? Thought not.)

This low-mileage life means that when I head out to go somewhere for real, like a meeting last week at the wonderful and very bike-friendly Third Place Books near Ravenna that required me to ride 7.5 miles to get there and the same distance back home, I feel the burn.

I also acquired my Mary Poppins bike since moving here. I love the upright posture for the improved view of the street and the psychological effect on drivers, who treat you better if you look like a regular person going somewhere for a “real” purpose, but it’s definitely heavier than my road bike and the low-end gearing isn’t quite low enough so climbing is more work all around. I get more compliments on my cute bike, though, so it’s totally worth it, and I figure the workout I get when I do get some miles is probably a good thing.

On the other hand, it was a bad choice of bike when I did over 20 miles to go to and from Bellevue for a Comcast interview a few weeks ago. If I were riding some decent mileage regularly I would have been fine, but I was worn out when I got there and still had to face the ride home. Good thing my sweetheart was with me for moral support on my first ride across the I-90 bridge.

One of my first impressions has persisted: Seattle drivers on the whole give me pretty good treatment.

I still haven’t been honked at, for one thing. And I’ve observed that when I’m preparing for a lane change and looking back repeatedly it seems that drivers notice and will make a hole so I can move over, even before I’ve signaled.

I’ve learned a couple of streets I like for getting through downtown–Fourth Avenue works well to head north from the Bicycle Alliance office in Pioneer Square, for example. And the one I don’t much care for–Second Avenue with its very fast vehicle traffic. Despite the bike lane it’s an aggressive environment and a story about a driver-caused bike/car collision there that I read yesterday (complete with lots of troll comments) makes me plan to avoid it in future.

I’m greatly enjoying the much higher visibility and availability of bike infrastructure. It may not all be cycletracks–but they’re in the works. I didn’t start out as much of a fan of sharrows when they were installed in Spokane and they’re still no replacement for either lanes or separated tracks, but I’ve come to value the visual cue of that bike picture on the road. And when a major arterial like Dexter has bike lanes–with an extra-wide buffer strip between the vehicle travel lane and the bike lane–I have to wonder what makes it so hard to get bike lanes on Second or Third Avenue in Spokane with much lower traffic volumes.

Some other riding experiences of the past few months: