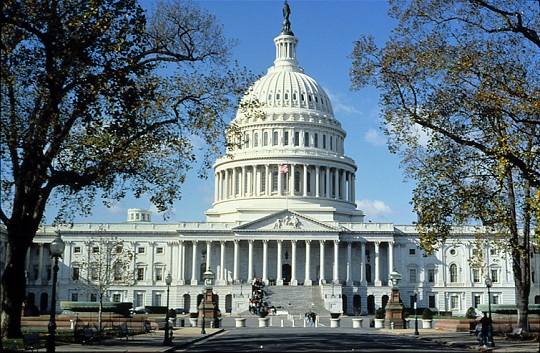 In the other Washington they're deciding whether or not we will have a funding source for Safe Routes to School, bike lanes, pedestrian safety, and other critical elements of our transportation network. Tell them you care!

It’s been a heavy week on Bike Style with pieces on street funding, the importance of transit, and engineering. We’ll soon return to the regularly scheduled programming with its mix of ride reports, cute gear, shopping, and other topics in addition to policy. But this is important.

As recently discussed here, select members of the House and Senate are negotiating in conference right now to produce a final transportation bill.  All indications show that these negotiations will decide whether we see a final Surface Transportation Bill signed into law this year.  There may very well be a bill by the June 30 deadline, when the current authorization expires.

The Senate’s version of the transportation bill (MAP-21) includes the bipartisan Cardin-Cochran agreement, which would provide funding to local governments for projects that promote biking, walking, and Safe Routes to Schools.  House conferees are placing a lot of pressure on the Senate to strike the Cardin-Cochran agreement as part of any final deal on a transportation bill.

Advocates for biking, walking, and trails have worked tirelessly to secure dedicated funding for recreational trails, Transportation Enhancements, and Safe Routes to School.  The latest negotiations place these programs at great risk, as one proposal gives governors the opportunity to opt out of these programs.

By eliminating the Cardin-Cochran agreement, the House proposal would take away local governments’ access to federal funds for walking, biking, and Safe Routes to Schools, undercutting local control and the ability to invest in a more comprehensive multimodal transportation system.

Examples of planned Transportation Enhancement projects in Spokane County that could lose funding if we lose Cardin-Cochran include the Ben Burr Trail connection through Liberty Park to Centennial Trail and the Wandermere Pathway from Children of the Sun trail to Dartford Drive (from the SRTC 2012-2015 Transportation Improvement Program). If you live somewhere else ask your local metropolitan planning organization for a list of TE-funded projects past, present, and future.

In addition, MAP-21 includes $700 million in dedicated funding for the Land and Water Conservation Fund (LWCF) for the next two years.

This has become a controversial topic and some conferees are opposing the inclusion of LWCF in the final transportation bill. Kind of funny, really, considering that it isn’t funded by the federal gas tax and doesn’t compete with road projects.

The LWCF funding has NO impact on transportation funding or the national debt. The program’s revenue comes directly from the royalties paid by oil and gas companies drilling on our nation’s outer continental shelf, not from money paid by taxpayers.

See how much money your state has received from the LWCF (PDF) and a map of Washington projects. The map shows all National Park Service programs; deselect other funding types to see LWCF only or get a look at just how much NPS has done for our state overall. I don’t see any Spokane-area LWCF projects, which suggests to me that we should get on the stick and apply for some—that is, if you contact your senators and representative and the program funding is preserved.

The Rails to Trails Conservancy has an action page that makes it easy for you to let your senators and representative know you support funding for trails and bike/pedestrian facilities, as well as the LWCF. If you don’t see your member of Congress on there, forward this to a friend who lives in the right district and ask him/her to speak out.

Contact the members and urge them to preserve the Cardin-Cochran provision to give local governments a larger voice over their state’s transportation dollars (“States Opting Out is NOT an Option!”), as well as dedicated funding for the LWCF.  Call the Capitol Switchboard at 202-224-3121 and ask to be connected to the Congressional office you want to reach.