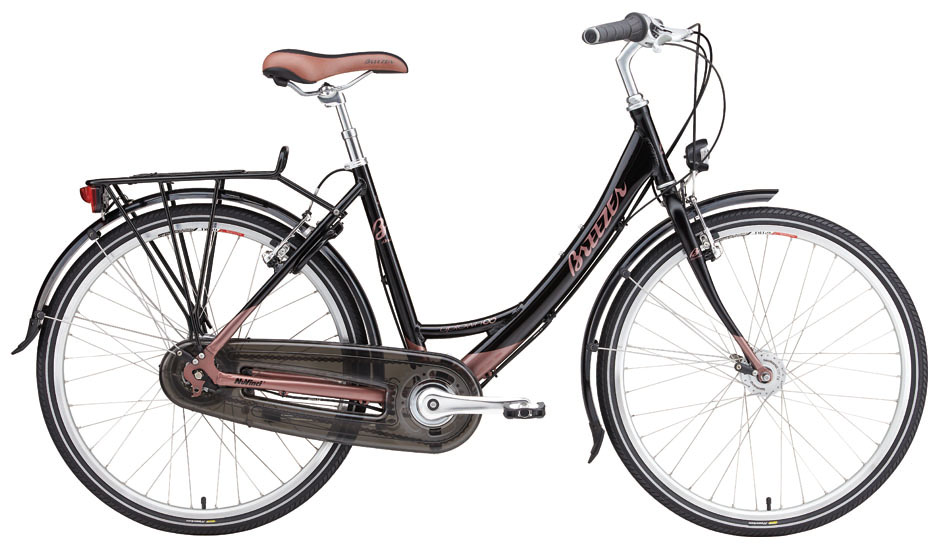 A much better photo of the Breezer Uptown Infinity LS, courtesy of BreezerBikes.com

Thanks to my friend Wilma Gyswyt Flanagan I got to test-pedal a Breezer Uptown Infinity LS for a few miles. These are my initial impressions and in no way constitute the kind of exhaustive review I would write if I put it through a lot more mileage. And then there’s the fact that I’m no kind of professional reviewer so pretty much every post here could be labeled “informal impressions”, I suppose.

By way of background, my usual commuter is a Specialized Dolce road bike I have Frankenbiked into a commuter through the addition of fenders, a back rack, lights, and other elements such as a ringy-dingy bell, all of which my Sweet Hubs racer would probably describe as “added weight.” (Or, as the Lovely Bicycle blog puts it, my bike exhibits an “aesthetics of use”.)

Even with the added weight, though, I can easily lift the Sweetie and carry it up a flight or two of stairs with an average load on board.

“Average” includes whatever I’ve thrown into my Donkey Boxx, which could be a full bag of groceries, and whatever is in my Po Campo Loop Pannier, which might mean a laptop and some files, along with the Po Campo Wristlet somewhere in the mix. The bike itself weighs around 18 pounds before all the stuff I added and the things I carry.

I conducted the usual hunt-and-hurt-for-years effort to find a saddle that gives me reasonable comfort (Selle Italia Terrazzo works for me), tweaked the stem height up with an extra piece to eliminate some burning across the shoulders, added extra-thick bar tape, and made other comfort adjustments.

It’s still a road bike, though, and ever since riding an upright model a while back I’ve believed I want a commuter or city bike for the upright posture. I spend so much of every day hunched over a computer that hunching over my bike adds insult to injury.

I also find it very appealing that some city models come with a chain guard, some even have a skirt guard, and they’re mostly all step-throughs. While I’m pretty practiced with the unobtrusive hoist of a leg over the top bar I wouldn’t mind a more ladylike entry onto my vehicle.

A ride of around six miles on the Breezer—typical light commuting day—gives me pause for thought, though.

First, what I liked: It’s an attractive bike overall with a sharp paint job and nice swoopy lines. The indicator on the shifter shows a bike climbing a steep hill when you’re in the easiest (i.e., hill-climbing) end of the gearing and a flat road when you’re in the hardest end. Very intuitive.

I’m so used to shifting down for stops that I never took advantage of the system’s ability to shift while stopped, but how awesome would it be to never again get caught in your big ring by a sudden red light or unexpected stop?

The grips have a little extra place to rest the wrist, which is a nice touch, in particular for those of who spend far too much time mousing around and risking carpal tunnel.

For hauling stuff it was easy to attach my Po Campo Loop Pannier to the back rack, then set my Po Campo Logan Tote on top and secure it with the springloaded “grabber”—I didn’t even have to attach the bag.

However, that grabber wastes a bit of the back end of the rack because it’s mounted about a quarter of the length forward from the end; the placement seemed kind of funny to me. I turned the Logan Tote sideways in order to use the grabber, as it wouldn’t accommodate the bag placed the normal way lengthwise along the rack.

The handlebars are skinny enough to accommodate just about any accessory that belongs there. Adding things can be a problem on my roadie with the fat bar tape so my bell, for example, has to grab the very end of the drops instead of being in a convenient spot.

The wider tires and shock-absorbing qualities of the seat design smoothed out Spokane’s cracks and cobbles in a way I greatly appreciated. What I don’t know is how I’d fix a flat, given the dynamo generator on the front for the lights and the different gearing set-up on the back that change the way I’d take a tire off and put it back on, so I’d have to take a class to feel competent.

Now why I won’t be buying one–reasons that quite possibly apply to all city bikes of this general type, not just the Breezer, but I’ll know better when I’ve ridden a few more:

The NuVinci continuous internal transmission is supposed to be the equivalent of around 8 speeds, whereas I’m used to 24. Running around the flat downtown this didn’t matter a bit. Climbing on the way home, though, I worked harder than I’m used to on the hills by at least three gears’ worth of effort–maybe more.

This feeling that I was totally lacking the granny gear surprised me. I’d expect a bike set up for easy riding, not racing, to give you as much efficiency as possible in the low end for people who aren’t used to a lot of riding. At the same time there’s no real top end to reward effort with the equivalent of only 8 gears. Sprinting to catch a light was completely out of the question–this is not a bike that sprints.

In short, it gave me a workout. That’s great if you want it, but much of the time I bike because I’m lazy. When I want to burn calories I’ll get back on the road bike, stripped of some of its weight, and do miles with Sweet Hubs, thanks. I suppose if I made this my regular ride the roadie would feel even lighter but I really want the greater efficiency of more gears.

In addition, the fat, comfy saddle that worked great when I sat upright or went downhill became quite uncomfortable leaning into it to push uphill. Saddles are so personal that I won’t blame Breezer for this, but I can’t see why any women’s saddle should ever have a really fat front section. It’s going to chafe no matter what size your thighs.

Given the topography I face every day, with downtown Spokane in a bowl and hills all around, I’m no longer interested in something with only 8 speeds and a squishy saddle even though it was great fun pedaling through downtown with the breeze blowing my skirt and no fear of chain grease.

And then there’s the weight. I had an average load, if I figure that two bottles of Terra Blanca Botrytis and one of Terra Blanca Port picked up at Nectar Tasting Room after work would weigh about the same as a typical grocery run.

It was a bit of a huff ‘n puff hoisting the Breezer up two steps on my front porch to roll it into the living room (which is where we store our bikes). Turns out it weighs 37 pounds before the load is added. Of I had to carry it up a full flight I imagine I’d end up removing the bags and carrying those separately. This constitutes a hassle, and I don’t like hassles.

YMMV (your mileage may vary) so by all means give a Breezer a test ride. But make your test ride of this—or any bike—a real ride with all the topographical variety, load carrying, and bike moving by hand that you usually put in your day. I rode a similar-style PUBLIC Bike Mother’s Day weekend and thought I loved it, but I now realize I didn’t give it a good enough test with a load and more hill-climbing time, let alone the carry-it-upstairs test.

One more factor that surprised me that I’ll share in the spirit of true confession: I missed riding around with all the cues that tell people I know what I’m doing–or at least, that’s what I imagine a road bike signals as compared with a city bike.

This is really weird, considering that I don’t refer to myself as a “cyclist” and want access to lots of bike models to accommodate all kinds of transportation needs. I was having fun but at the same time felt a bit dilettantish instead of committed and expert.

I’m going to ponder a bit more on what’s going on inside my head with that one. After all, I’m the one who sails into all kinds of places and meetings with my bike stuff without batting an eyelash and would have thought I was a lot more secure in my bikehood than this suggests. But maybe that’s just it–I’m clearly “the biker” when I’m the only one in the room with bike gear of any kind whatsoever. I dunno.