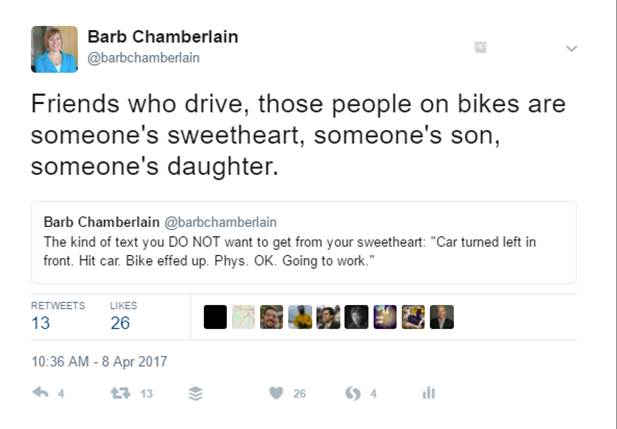 The kind of text you DO NOT want to get from your sweetheart: “Car turned left in front. Hit car. Bike effed up. Phys. OK. Going to work.”

This text set my heart racing Saturday morning at 10:14 a.m., just as I was preparing to set off on my bike to a massage therapy appointment for my frozen shoulder.

I immediately replied to ask if he had gotten the license plate or other information. He responded that he had the driver’s insurance information in hand and had arrived safe at work. Shaken, but glad he was okay, I posted a fast, angry update on Facebook and a series of tweets to the same effect to vent.

Then I set out for my appointment, watching extra carefully at every corner where I might have the right of way but be vulnerable to a driver turning in front of me. Post-massage I stopped for groceries.

Halfway through the grocery store my phone rang. It was my sweetie asking if I could come pick him up. His manager was sending him to get checked out and make sure he was okay. He said he felt fine, it was just a precaution.

I raced through the checkout and loaded my bags on the bike after checking that it would be faster to ride home than to catch a bus. The poundage felt extra heavy as I tackled the roller coast of hill climbs between the grocery store and our house.

Home at last, I asked Sweetie’s daughter — home for spring break — to put the groceries away, grabbed the car keys, and headed to pick him up. He was waiting with his bike — dinged but ridable — and a load of frustration at the actions of the driver.

He had the right of way on a downhill setting up to make a right turn. The driver was coming uphill to make a left turn. She stopped, which to a reasonable person would be an indication that she saw him and was waiting per the law. Instead, in a classic failure to yield on her part, she hit the gas and started into the turn.

He saw this coming too late to avoid it, but in time to adjust the angle at which he T-boned her so he didn’t go flying across the hood. No police called, no police report filed so this isn’t in the statistics. If it were it would fit right in: 29% of injuries involving bicyclists are the result of someone in a vehicle hitting the person on the bike. Thanks to posting this story on Facebook he found the Washington State Patrol self-reporting site for reporting motor vehicle collisions so at least there’s something somewhere.

After a thorough checkup they sent him home. He spent the rest of the afternoon fixing his bike. The aches lasted a couple of days, but so far we haven’t seen signs of any deeper damage. He’s riding to work.

My sense of how important it is to cherish every minute with the ones you love is even higher than it was after my own crash last year. My dedication to making streets safer for everyone who rides could not be stronger.