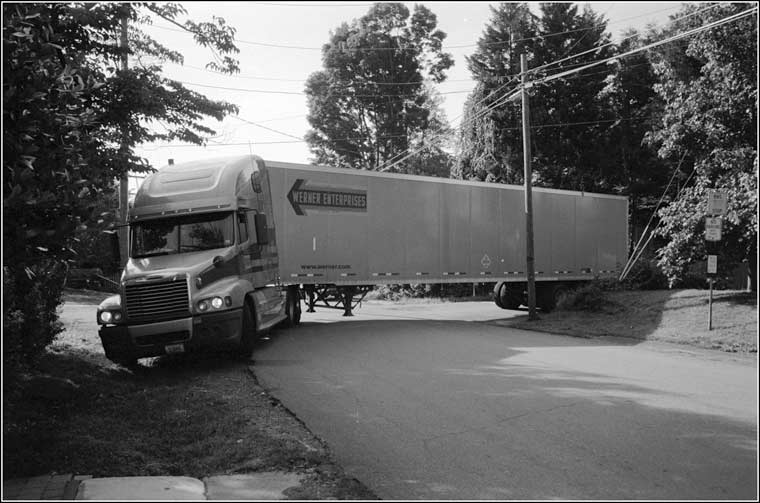 Originally I planned to write this post as the second part of my response to Bike Shop Girl’s piece We Are the Problem. One of the underlying assumptions in her post that I take issue with is the idea that if it weren’t for bikes traffic would flow merrily along with no bumps or wrinkles.

Now I’m writing it because a friend posted on Facebook about why she occasionally feels the need to take the lane and in no time at all had over 25 comments. No, wait–make that 38–no, wait–44–I just looked again. Not that this topic engenders a lot of discussion or anything.

I could have predicted the “get out of my way” comments, and I’m here to suggest a different way of thinking about how street traffic really works.

My main point, in case you’d miss it if I buried it further down the post: There is no law guaranteeing any street user anything like “unimpeded speedy passage with no need to slow down, ever.” There just isn’t.

So in response to this:

Let me point out that typical street traffic includes all of the following, every single day (well, except maybe for item #1, which probably doesn’t happen every day):

This is just a sampling and you probably have your own favorite story about something that hung you up when you were in a hurry. But how often does that story revolve around something to do with someone in another motorized vehicle rather than someone on a bike?

My main point again, then, is that traffic has many causes for slowing, stopping, and sometimes even choosing an alternate route. Someone riding a bike is only one of many such things you’ll encounter in your driving day. You never had any reason to expect that you could just barrel straight to work without anything slowing you down. If you drive that way it’s only a matter of time before you cause that last bullet item on the list.

And besides, realistically, for how many minutes or seconds does someone riding a bike legally hold a driver back for more time than it takes to traverse a city block?

I’m serious when I say “seconds;” as anyone watching a really bad commercial can tell you, seconds can drag on for what seem like hours.

Arterials have multiple lanes and residential streets have low traffic volume, so the true elapsed time you’re “stuck” just isn’t that long if you time it. I think the 3-5 seconds you’re behind the bike before you can safely pass feel far longer than they really are.

If you’re in incredibly heavy traffic and can’t change lanes, in an urban setting you’re not going fast anyway and the person on the bike is probably keeping up with traffic just fine. I know I do and I’m not any kind of athlete. Sure, I’m going slower heading up new-to-me Seattle hills than I do on the flat streets of downtown Spokane, but this is in heavy traffic and everyone stops at every traffic light.

If you’re going to complain about someone on a bike, what if you kept track of everything that creates a change of speed in your driving? You might be surprised.

Then when you get where you’re going and you can’t find a parking spot, imagine that a couple of the cars ahead of you weren’t there because those people chose to ride a bike instead. As a little reminder, take a look at the video in If Bikes Were Cars and Cyclists Were Drivers.

You might also get a very different sense of the passage of time if you rode a bike, but I already wrote that post.