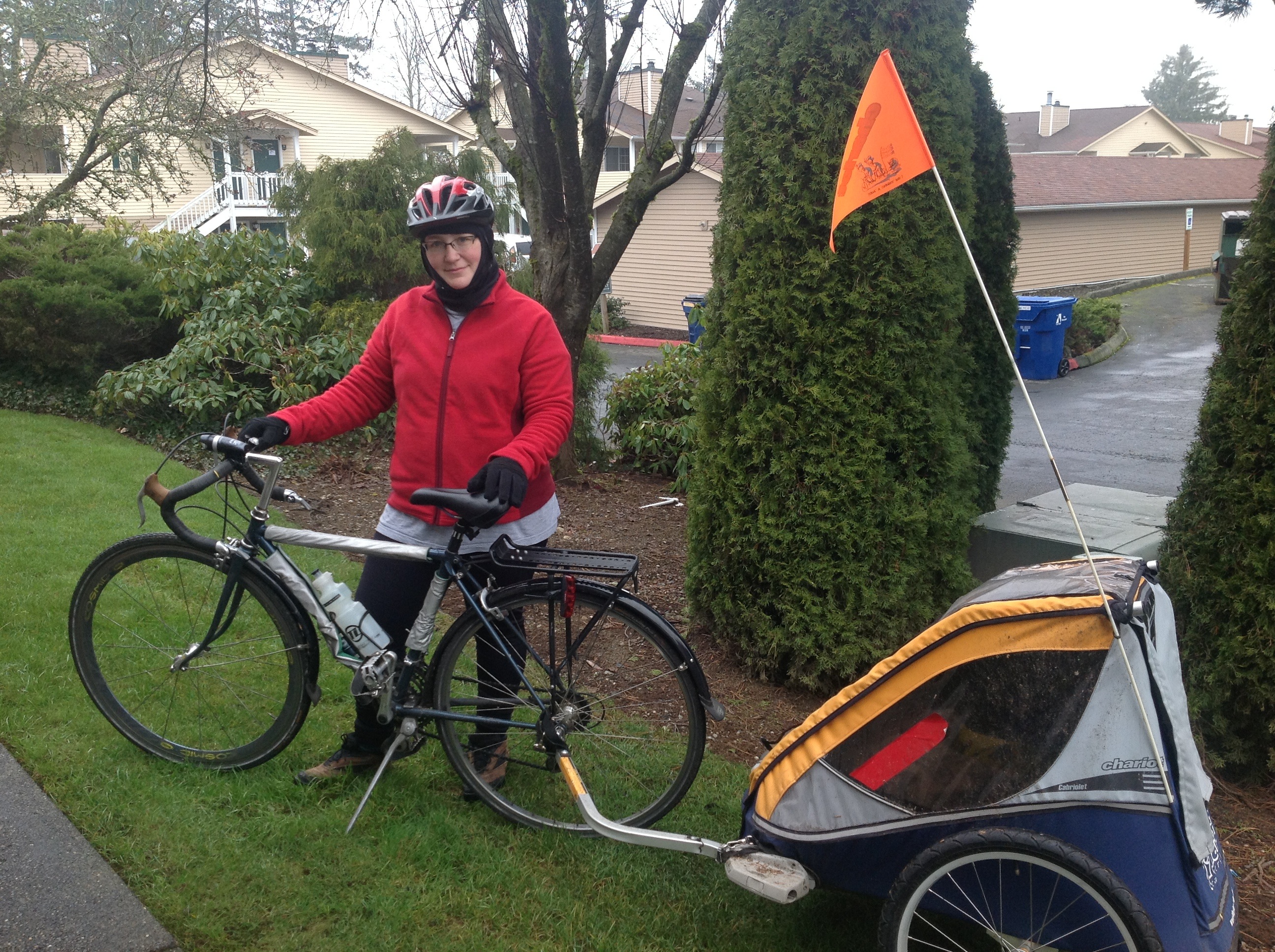 Michelle with her Sekai and kiddo-hauling trailer.

The occasional “On a Roll with” series started with women in Spokane since the blog originally focused on biking in Spokane. Now that I have a statewide role at the Bicycle Alliance of Washington I’ve expanded the geography to feature women from all over the state. If you have a woman to nominate (and please do nominate yourself!) drop an email to bikestylespokane-at-gmail.com. The account is checked v-e-r-y sporadically so it may be a while before you hear back.

How do you describe yourself?

I’m a 38-year-old woman who has been riding a bike fairly regularly for the last 24 years. I’ve ridden in the suburbs, big cities, little cities, on trails, major arterials, the developed world, the developing world, and now I ride around with my almost-three-year-old in a trailer. I’ve ridden to work, the movies, the grocery store, to drink coffee, to visit friends, for the heck of it, and once to an auto parts store.

The auto parts store didn’t have a bike rack.

Who or what made a difference in your life that got you on a bike?
I’ve thought a lot about this question over the years – riding gives you lots of time to think – and I guess it was a confluence of factors:

So starting at around age 13 or 14 I had ready access to transportation. My parents exhorted me to carry a quarter in case I needed to use a pay phone in those pre-cellphone days, and let me go. It was amazing freedom.

The summer I was 15 I attended summer school at Bellevue High and rode the 25 hilly miles round-trip ride every day. That I could get all the way to Bellevue and visit Tower Records on my own steam was tremendously liberating. My collection of Dead Milkmen cassette tapes increased dramatically that summer.

Tell me about your bikes and accessories.

Oh god, is anybody still reading?

These days I’m down to just three bikes. I have a fancy road bike built by R & E Cycles way back in 1999. That’s the bike I’ll ride the STP on, and I use it for most rides over 50 miles. My “rain bike” is a 1983 Sekai frame with Shimano bar end shifters and all sorts of idiosyncrasies, some more charming than others. I love the bike, because it was built by my friend, Val Kleitz. The Sekai is a functional monument to his ingenuity and skill, especially given the Imperial ton of abuse I have heaped on it. Right now, it’s also my kid-hauling bike, so I’ve got a fancy Chariot trailer hooked up to it that my kid rides around in.

I also have a Novara Fusion with mustache bars, an internal 8-speed hub, and Shimano mechanical disc brakes that work surprisingly well. It has a chain guard and is super, super fun to ride. I’d ride it more often, but the accursed dropouts on the frame won’t accommodate the trailer hitch, so right now I only use that bike on weekends when my husband is around to watch our kid.

The Novara has a coffee cup holder on the bars and also hosts a NightRider 600 lumen headlight – “The Stroke Inducer” – which is about a million lumens better than the lousy incandescent lights I used to have for night riding. The reflective bike “clothes” I bought at a BikeStyle event, plus the Lightweights spoke reflectors I acquired last year, help with side visibility at night, too. The double kickstand on that monster keeps it from tipping over when the panniers are full of groceries.

Those panniers are Ortleibs and I also have an Ortleib backpack, both of which are the most well-designed pieces of equipment I’ve ever had. They’re also great for roadkill transport (please don’t ask).

My next bike will have an internal hub and fully enclosed drive train, since I ride in a lot of wet weather.

What types of riding do you do? How often, what destinations, and how far?

I ride recreationally and for transportation. My sweet spot seems to be about 20 to 25 miles a day, five to six days a week. I haven’t had many commutes that were that long, so what I’ve done in the past is get up early and ride recreationally before work, with work being my final destination. I’d get dressed for work in a bathroom stall when I get there, which sucks donkey balls, but baby wipes and an extra stick of deodorant make it doable.

The worst, though, is when you forget to pack something important before you head out, like your work pants.

Sometimes I do long-ish organized rides, usually centuries, and this year’s upcoming STP will be my fourth. I find those kinds of rides pretty fun, although there is a certain demographic that’s attracted to those rides that is, whoa, so totally not my cup of tea.

What’s the most common question you get asked when you bike somewhere?

Wait, where did you bike from?

What do you usually wear when you ride?

In defiance of all fashion laws, I’m a Spandex girl. I will pause and let the reader gasp in horror.

Spandex is the only option for me, because I’m too fat for the fancy pants I see reviewed on certain people’s blogs (ahem) and nothing else is even remotely as durable. I am not joking: one pair of Sugois lasted me FOR A DECADE. A DECADE. Mind you, I have a few pairs of ‘em, so it’s not like they’re seeing daily use (gross), but still.

I tried to buy some nifty men’s cycling shorts last year from Nashbar (they’d fit me like capris), but their prices were oddly ambiguous and it made me mad, so I gave up. Spandex it is.

I also wear layers most of the time, one of which is always a turtleneck in the winter. $10 gloves from Costco have kept my hands warm in 18 degree weather. I’ve had an REI raincoat for twenty years that still keeps the rain off and keeps me warm. When it’s chilly and not raining, I wear fleece. A cheap balaclava keeps my head warm and dry eight months out of the year. In the summer I wear short Spandex and a t-shirt. I wear a helmet, too.

In other words, when it comes to what I wear on the bike, I’m a honey badger.

What things do you wish were different about your bike and gear or women’s clothing or both that would make it easier to bike and look good, if this is something you give any thought to?

I wish I could buy a road bike that didn’t have crossover between my feet and my front wheel. I wish the Campagnolo shifters on my custom bike had the fat part a little further up the damn lever, so I didn’t have to shift my whole arm to reach it and deal with the consequent tendonitis. I wish the off-the-shelf “women’s” mountain bike I bought two years ago (I’m looking at you, Giant) wasn’t a complete and unrideable piece of crap that CAME WITH A MEN’S SADDLE. I wish clothing manufacturers didn’t assume that fat women are too busy sitting on the couch eating pizza to require decent activewear; it’d be nice to be able to buy some dignity off the shelf.

What does your area need to make it an even better place for women to ride their bikes?

Oh gosh, I wrote an entire master’s thesis about this! Let me try – try – to be succinct:

Look, Olympia is a great community to ride in. Drivers are awesome, and the vast and well-connected Thurston County trail network makes recreational riding a dream. What it lacks, though, is what every American community (except for Boulder and Davis) lacks: safe, low stress, separated bike lanes that connect major destinations together. I’m talking about residential areas, daycares and schools, grocery stores, and major employment centers.

Getting to that point will take vision and courage, because it will require re-balancing our entire transportation system. Change is hard, but it is absolutely necessary, and I believe that most American communities have enough popular support to make it happen. So let’s do it!

I took some time off the bike in the years after I got my driver’s license and got really out of shape. I hated how I felt, and I hated being beholden to a machine that was prone to breaking – and costing me hundreds of dollars I didn’t have – at any point. So I made a deal with myself: I’d ride when I needed to go somewhere, but I wouldn’t ride up any serious hills – no small task in Seattle, where I lived at the time. I started out commuting to work from Ballard to Eastlake, and then later from the U-District to Eastlake. My car broke down for the millionth time, and I couldn’t afford to fix it, so I just ditched it.

After about a year of this “no hills” policy I really wanted to see a movie that was playing at the Egyptian on Capitol Hill, and I was tired of the bus. I carefully plotted a course up the easiest side of the hill, left insanely early, and thought, “Ok, I’m gonna try this. Maybe I’ll walk up the hill. But I’m gonna try this.”

It was actually easy! I had no idea how much I’d been limiting myself and how those daily “no hill” rides were adding up. I got to the movie an hour early and felt so strong and powerful. After that, I started riding everywhere. There isn’t a hill on earth I won’t try to climb, and most of the time I’ll get up it on my own power. A few times I’ve been lapped by joggers, but who cares?

What one word describes the way you feel most often when you ride?

What question didn’t I ask that you really want to answer?

Why don’t you get ever bored with riding? That’s the question I ask myself. I have no answer.

What would you tell a woman who is thinking of beginning to bike after decades of no cycling?

Thanks for reading my story! Cycling has brought me peace, joy, and focus. I have mourned, rejoiced, and found my way countless times from the saddle. I hope it brings the same thing to you! –Michelle S.