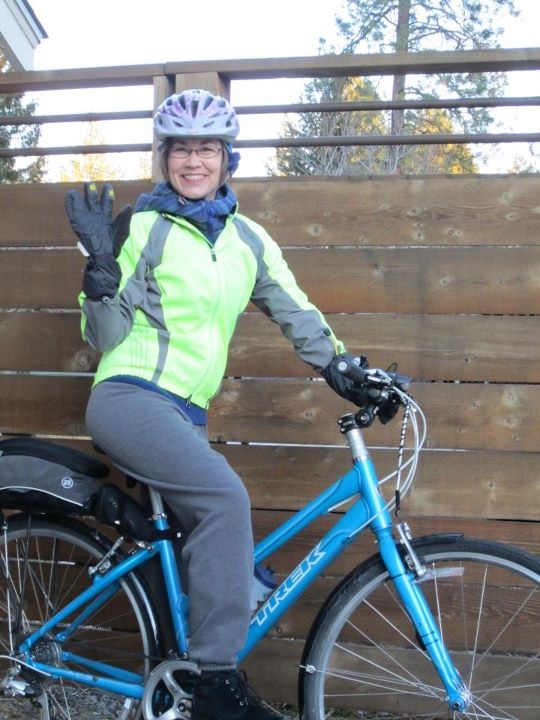 A guest post by Betsy Lawrence, AKA “yogaprof,” the founder of Belles and Baskets

I have written previously about how I began bike commuting; now here are a few lessons I have discovered along the way.

Lesson one: Be flexible

Once I committed to biking to work, I started the work of fine-tuning my commute. I soon realized one of my favorite things about commuting by bike—it challenges the brain. I am constantly watching, assessing, and switching my plans.

For example, the first time I biked to work, I crossed the Greene Street Bridge by riding in the car lane. I know the rules—ride a bike as though it is a car. That day I learned to sometimes break that rule. This bridge is a very narrow four lanes and packed with trucks and cars.

I was terrified and realized the sidewalk is a much better choice. It is rarely used, and whenever I see pedestrians on the sidewalk, I get off my bike and wait for them to pass.

I often have to tweak my route or wait for an unexpected delay. Flexibility is part of bike commuting and is good for the brain.

Lesson two: Create a route that feels comfortable to you

I have had to rework my route several times due to road construction. While trying to come up with a new route, I learned that following the advice of a male friend who is a hard-core commuter was not the best plan. I ended up cycling along busy streets in industrial areas, surrounded by stinky vehicles and passing endless buildings and parking lots. The only wildlife I saw was an occasional pit bull or dead rat. That is not what I want out of my ride.

Now when I need to change my route because of construction, I choose to go the more picturesque way; an additional five minutes of biking that is pleasant is preferable to saving time but losing my lungs.

To keep my ride from feeling daunting, I mentally break it into four segments: a ride to Barb’s house, a ride downtown, a ride to the river, and a ride to work.

Each segment consists of different terrain, neighborhoods and sometimes even temperature. I can mentally high-five myself after each portion and prepare for the next. It’s not an eight-mile ride; it’s four, two-mile rides, each with its own delights.

And most importantly, lesson four: Enjoy the view and say “hello”

I am privileged to have the option to bike commute. I have a nice, economical car, a pre-paid bus pass, and plenty of time. I am allowed the choice to cycle, and I choose to make it pleasurable.

I have the delight of riding along the Spokane River for a few miles when I bike commute. I see geese, ducks, and dog walkers. While that segment is easy to enjoy, even the most urban parts of my ride have their pleasures: the people I see.

I make it a point to say hello to everyone I pass (yes, EVERYONE) from spandexed runners, to street people with their shopping carts, to kids on skateboards, to folks exiting their Hummers. I figure these moments allow my community to see that cyclists are nice people and they give me the lift as well. I keep my eyes up and enjoy the view of nature and my neighbors. I feel immense gratitude when I can bike to work, and I hope to share that joy with everyone I pass.