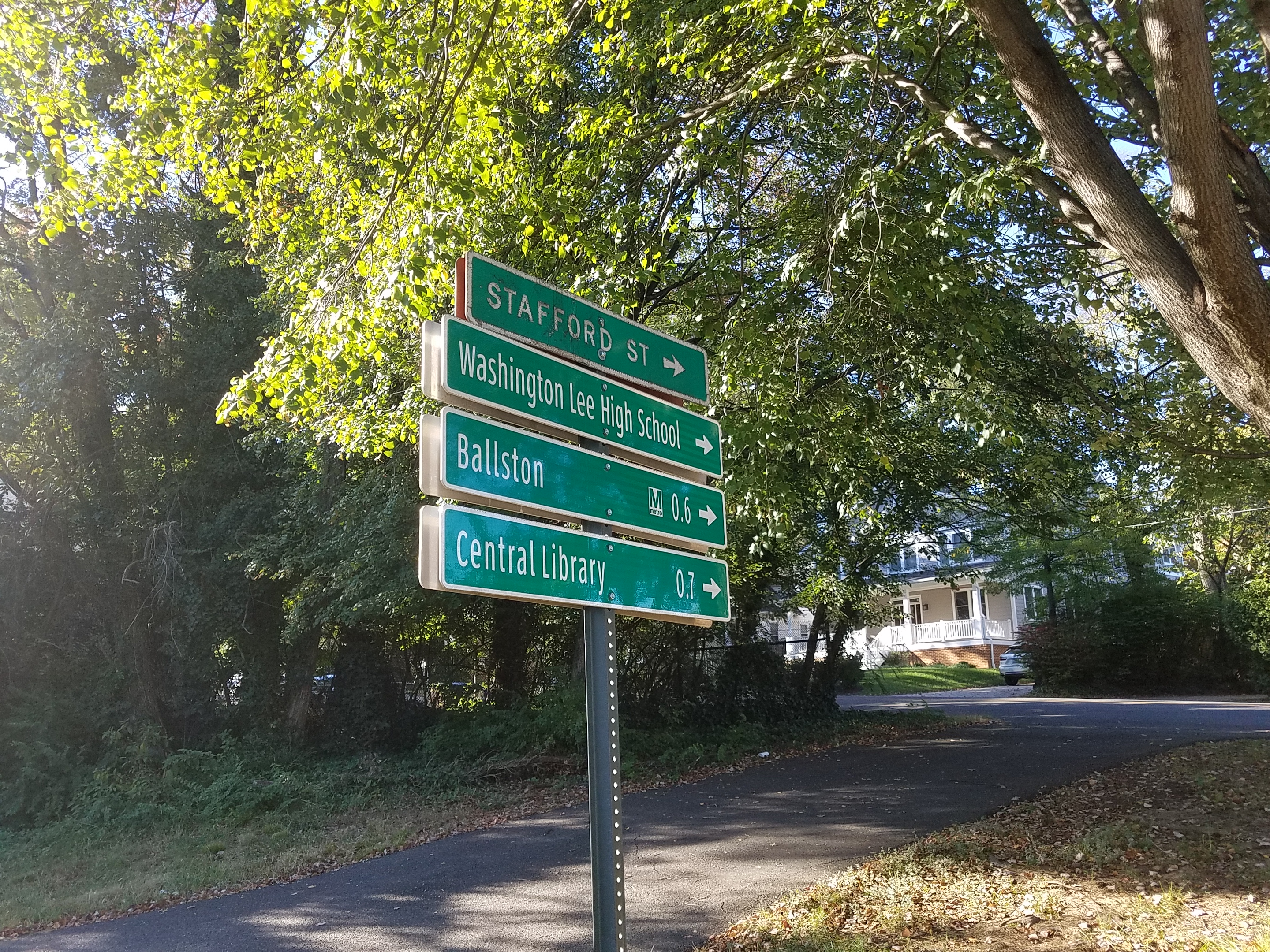 Wayfinding signage appears at intersections along the Curtis Trail that makes up part of the Arlington Loop.

A week after wrapping up the longest bike travel effort I’ve ever undertaken, what’s going on mentally, physically, and professionally? (since I took a vacation that relates to my work life)

Biking in a different part of the country gave me insights and ideas I can take back to work.

The signage! The joy of that much connected separated infrastructure! The benefits to small towns of having a trail bring customers right to their doors!

On the down side we encountered incomplete and inaccessible sidewalks in some of the towns we stayed in. At one stop we had to be picked up by a hotel shuttle because there wasn’t a safe connection from the trail to available lodgings, thanks to giant highways with no safe crossings or parallel paths. The lack of a complete bike network represents a cost to the hotels there, but clearly it’s worth it because multiple hotels were running these shuttles.

Okay, so I’ve been saying “Bikes mean business” and “wallets on wheels” for years to make the case for increased investments. The numbers back me up in economic impact studies of bicycling for Washington state and nationally. But there’s nothing quite like seeing it town after town after town (and on your credit card statement….).

One B&B we stayed in reportedly has added a building every year since they opened on the trail–they’re up to four. The owner of another told us her bookings have doubled each year since trail completion. In Little Orleans, MD, we heard a great story: The country inn we stayed in, Town Hill B&B, was originally built to cater to car travelers on one of the new “national roads.” Today their business during the height of the bike travel season is 75% bike tourists; for the year bike tourism is about 60% of their business (they book weddings and retreats since they’re a large facility in a beautiful location). From 100% car travel to 60-75% bike travel–huh.

Even the national franchise hotels get it. We stayed in a Marriott, a Comfort Suites, and a Red Roof Inn. Each had specific accommodations and amenities for bike travelers, like the bike-washing station at the Marriott in Cumberland (where they’re right on the trail) and the specific invitation to park our bikes in our rooms we got at each of these.

This influx comes at a rate that doesn’t overwhelm or lead to overbuilding capacity that sits vacant after the big event leaves. When I think about what bike tourism could do in the Pullman/Moscow area, as just one example–leverage the hotel capacity created to handle Homecoming and Mom’s/Dad’s Weekend crowds for two universities during the school year, capacity that isn’t fully utilized in the summer months–I see all over again how much it means to the local and state economy to build longer continuous trail mileage as a destination asset.

Yes, bike tourism absolutely can and does involve riding on highways, county roads and city streets. The US Bicycle Route System uses all kinds of infrastructure and we definitely need to leverage and improve every kind of connection. Every trip starts at a front door, after all.

Trails just offer a marketing advantage in their drawing power for people who aren’t comfortable in traffic. Investing in on-street connections to reach trails will bring more bike business into towns along the way as well as enabling local residents to access the trails for healthy transportation and recreation. Signage along the trail also pointed us to local businesses, similar to what drivers see at freeway exits.

Furthermore, bike tourism brings economic activity that primarily stays in local cash registers and pockets. When you drive and fill up your gas tank most of those profits leave town. When we fueled up it was in locally owned restaurants and bike shops. For every dollar spent at a locally owned business 67 cents stays in the community and building bike infrastructure creates more jobs per dollar spent than a highway project. Show me a town that doesn’t want that kind of return on investment.

All in all the trip reinforced everything I’ve learned over the years as an advocate for more and better bike connections: They make communities more livable, more economically vibrant, and healthier. Each mile we add to the system brings these benefits closer to home.