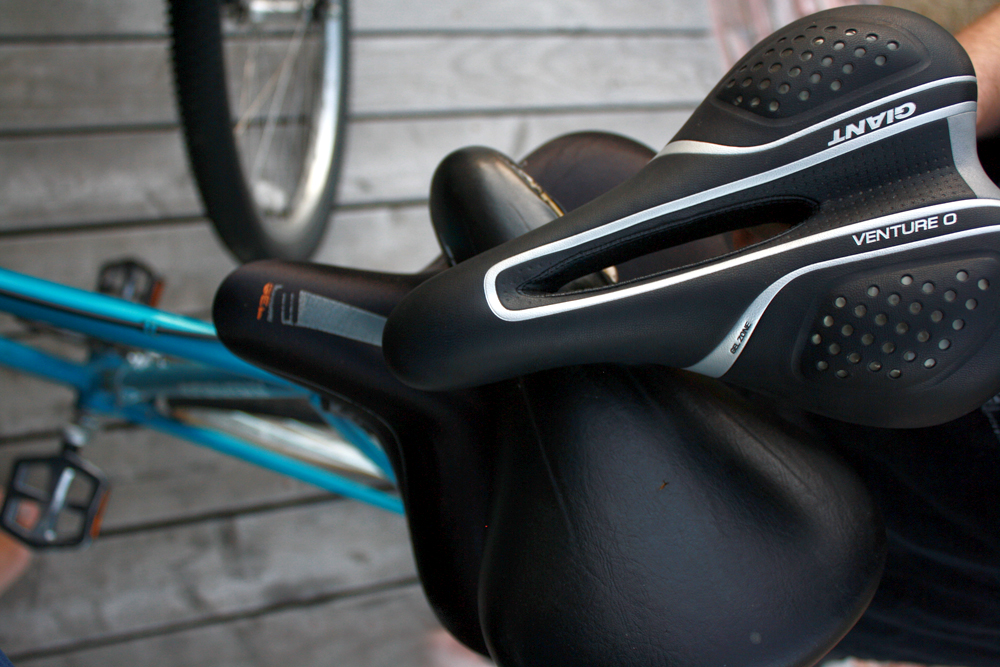 These are just three of the five seats I tried in looking for a life partner for my backup bike.

In the 1960s, car designers began including something new and rather revolutionary in vehicles:  cup holders. These devices, once considered a luxury, quickly moved from novelty to selling point. Now some car experts claim that the number of cupholders can sell a vehicle much more quickly and easily than anything else, even when the rubber that meets the road is something entirely different. A bike saddle or seat is considered by some to be like these cupholders: an unnecessary but mildly important selling point.

I disagree. No matter what tires you have on your bike, how well-fit it is, or even what kind of bike it might be, I consider the bike seat or saddle to be one of the most important components of any bike you may ride. In fact, in many ways, finding and settling on a seat/saddle is much like finding the right life partner.

Pay attention to what you get intimate with

A bike saddle/seat is one of a few points on your bike you will touch on a regular basis. The wrong saddle/seat can make life incredibly uncomfortable and even downright torturous. Many people stay with the wrong saddle or seat for far too long, because it is scary to try and move on to something that might be better. The right saddle or seat becomes like a part of yourself, something that is so natural and comfortable and wonderful that you can’t imagine life without it (even when you spend too much time together and begin to chafe a bit.)

And, not to put too fine of a point on it, the wrong saddle can have very un-fun effects on your sex life–both tonight and for the long term.

So let’s sit down, grab a cup of coffee or a martini, and have a one-on-one talk about the status of your relationship.

First of all, let’s clarify the bike saddle/seat question. Some people will make a differentiation here. I’ve been told that some say “saddle” because you don’t “sit” on the bike seat so much as “perch” with your sit bones. I’ve also heard it called a saddle because it is a much more personal fit than just an everyday chair you sit in.

I’ve also heard them called bike seats because “seat” is just a lot more natural of a statement. “Seat” is also what the more chair-like apparatus on recumbent bikes are called. In the end, even Google agrees that use of the terms are evenly split at about 200,000 searches a month, so call them whatever you will–I use the terms interchangeably.

Second, let’s have a talk about the Disney fairy-tale expectations we all grow up with for our relationship with our bike seat. We think that we will find the bike we love, and everything about it, including the seat, will be perfect. Sure, there might be a bit of adjustment to required, a shoe to fit here and there, maybe even a tower to climb, but in the end we ride comfortably off into the sunset.

For a very few people, this might even be true. For those of us that are not genetically, socially, and mythically gifted, however, there comes a time when we simply must give up this romantic ideal. Trying to hold on will just cause more problems with the seat relationships we do have.

So what are we left with? A world of relationship options to be explored in the follow-up post.