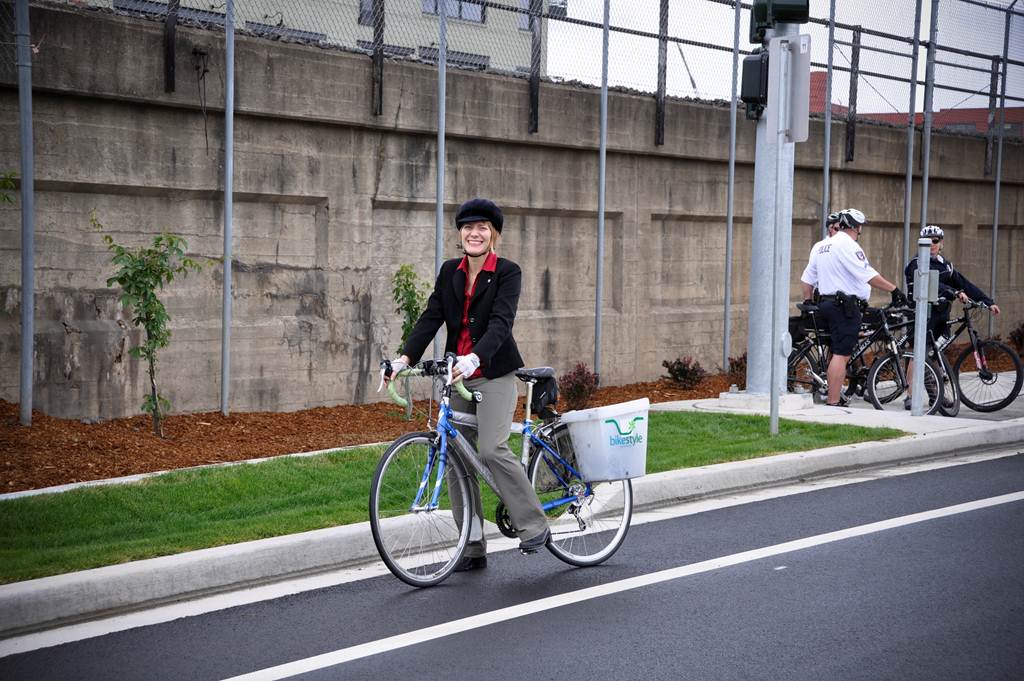 Riding my road bike on the new Martin Luther King, Jr. Way in Spokane when it opened in 2012. The mayor's office hadn't planned bike participation so I fixed that.

I believe I’ve proven in these pages that I’m perfectly willing to (a) give you a laugh at my expense and (b) prove that I’m not an expert on bikes. My confusion over the Trek’s shifting mechanism when I tried out Betsy’s bike comes to mind–who would have guessed that its mechanism worked just like the one on my road bike? Not me, apparently. This post should give you another laugh, especially if you own various types of bikes and switch easily from one to another.

Yesterday gave me another chance to reacquaint myself with what Zen masters call Beginner’s Mind, which is a humbling place to be. Why? Because I got back on my road bike after months of riding an upright bike.

The early days on the Mary Poppins bike I’ve been riding since last fall were full of little things that made me laugh because they were so different from my road bike:

All that confusion and every attribute that I wanted in a daily commuter, from upright posture to fatter tires to the step-through design, came back at me yesterday when I got back on my road bike to get in a few miles this weekend riding with my sweetheart.

I’m sharing the story to illustrate that every kind of bike is different. If you don’t like the one you’re riding now and that’s going to make you stop bicycling, try a different kind of bike!

Don’t worry about what “everyone” rides, and find a local bike shop with staff who will listen to you respectfully and suggest options to address your concerns. The differences I felt between my two bikes, especially given the amount of mileage I’ve put in on my road bike, make the phrase “just like riding a bike” seem a little silly.

I’m also illustrating that someone with a fair amount of experience–I’ve been bike commuting for years–can be just as shaky out there as you are, if you just started, so that’s no reason to feel embarrassed.

Now, to redeem myself somewhat, let me point out that I’ve ridden my upright bike pretty much every day since I got it October 8, 2012. Oh, wait–that’s only four months. Dang.

Point is, I haven’t ridden my road bike at all in that same time frame. Setting off on it for a ride by myself yesterday morning to go meet up with Sweet Hubs at a coffee shop proved a little strange, and anyone watching me take off would have thought I was a total newbie.

The one problem I did not have, much to my pleasant surprise, was clipping out of my pedals. That’s the one that can be really painful when you can’t get your foot loose in time and fall over, still firmly attached to your pedal and burning with embarrassment and road rash.

After a wobbly take-off and realizing I literally felt nervous being on my own bike as I climbed north on First Avenue in downtown Seattle through thick traffic around Pike Place Market, these are the things I did yesterday riding a bike that was my sole commuter for five whole years:

I rode again today and felt much more comfortable (except for those elbows). With 13 miles yesterday, 17 today, that’s more mileage on my road bike this weekend than I get on my commuter bike in the course of two or three typical weeks because I live too close to work and the work days are long and intense. (This, of course, argues in favor of more riding, not less, and I did actually take a lunch break the other day and go ride my commuter for about 30 minutes on the Sodo Trail, which takes off south from Seattle’s International District not too far from my office in Pioneer Square. But that’s not typical.)

It will be interesting to see how it feels to ride my commuter bike tomorrow. Expect to see me hoist my leg high in the air over a bar that isn’t there.