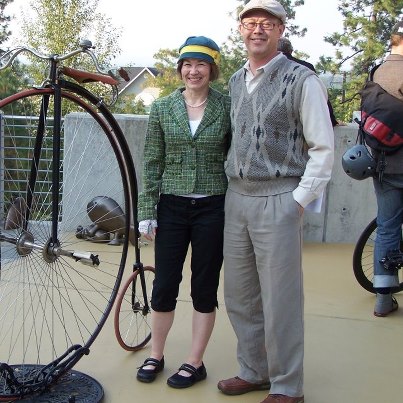 What a treat to be part of The MAC’s first tweed ride. With sixty or so participants, most dressed in clever costumes, it was a night to be remembered.

We gathered in front of the museum and then rode on First Avenue to Howard Street and to the Rotary Fountain in Riverfront Park for a photo and a few loops around the fountain. As we rode through downtown, a young man opened his car window, asked what we were doing, and said “we made his day!”

We rode along Riverside, returned to Browne’s Addition and stopped at four historic homes and apartment buildings where a historian from the MAC told us their histories. As we finished our loop, we returned to the museum for drinks, badminton, music, and snacks.

Some elements that made the ride so delightful were the enthusiastic riders who ranged in age from twenty to over sixty; the various bikes, some modern and several antiques; and the great costumes complete with hats, faux knickers, high heels, dresses, jackets, vests, ties, pipes, and plenty of fake mustaches.  It was obvious that connecting an event at the MAC with a bike ride made for a successful evening.

There is something about sharing a physical activity that seems to bring a connection to all participants. I am confident there will be another tweed ride next year and heard a rumor of a seersucker ride in the spring!