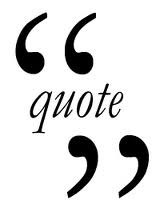 Many thanks to QuickRelease TV for quite a few of these quotations. I’ve been saving for a while so I no longer know the sources of all of them.

“How about if we all just try to follow these very simple Rules of the Road? Drive like the person ahead on the bike is your son/daughter. Ride like the cars are ambulances carrying your loved ones to the emergency room. This should cover everything, unless you are a complete sociopath.”
Letter to VeloNews from David Desautels, Fort Bragg, California

“There is something about the miscreant cyclist that seems to get people more exercised than they are about the misbehaving motorist…When people get into cars, their metal encasement turns them into robots in our minds, and we’re grateful to them for any act of courtesy. We’re grateful that they don’t deliberately kill children, then laugh a rasping, metallic laugh…[Cyclists] are more civic-minded than anyone else travelling in any other manner, bar by foot. If they do run into someone, they at least (like the bee) do their victim the favour of hurting themselves in the process, which is why, if you had any sense, you’d save your hatred for the motorist, who (like the wasp) injures without care.”
Zoe Williams, The Guardian, 4th February 2006

“Devised almost 200 years ago by a practical German baron, the bicycle has evolved into an urban staple. Beloved of children, prized by inner-city commuters, it can be a lifesaver when summer smog chokes the nation.”
‘Globe and Mail’, Canada, 6th June 2006.

“To me the bicycle is in many ways a more satisfactory invention than the automobile. It is consonant with the independence of man because it works under his own power entirely. There is no combustion of some petroleum product..to set the pedals going. Purely mechanical instruments like watches and bicycles are to be preferred to engines that depend on the purchase of power from foreign sources….The price of power is enslavement.”
Birdwatching author Louis J Halle ‘Spring in Washington’, 1947/1957

“Drivers wish for better roads and less congestion, but are unprepared to make personal sacrifices by reducing the amount they use their car in order to achieve this outcome.”
‘Counting the Cost, Cutting Congestion’, RAC Foundation, 2004

“The bicycle is a curious vehicle. Its passenger is its engine.”
John Howard

“[A bicycle is] an unparalled merger of a toy, a utilitarian vehicle, and sporting equipment. The bicycle can be used in so many ways, and approaches perfection in each use. For instance, the bicycle is the most efficient machine ever created: Converting calories into gas, a bicycle gets the equivalent of three thousand miles per gallon. A person pedalling a bike uses energy more efficiently than a gazelle or an eagle. And a triangle-framed bicycles can easily carry ten times its own weight – a capacity no automobile, airplane or bridge can match.”
Bill Strickland

“People like to travel: that is why the grass is greener over the fence. We are walkers – our natural means of travel is to put one foot in front of the other. The bicycle seduces our basic nature by making walking exciting. It lets us take 10-foot strides at 160 paces a minute. That’s 20 miles an hour, instead of 4 or 5… It is not only how fast you go – cars are faster and jet planes faster still. But jet-plane travel is frustrating boredom – at least the car gives the pictorial illusion of travel. Cycling does it all – you have the complete satisfaction of arriving because your mind has chosen the path and steered you over it; your eyes have seen it; your muscles have felt it; your breathing, circulatory and digestive systems have all done their natural functions better than ever, and every part of your being knows you have traveled and arrived.”
John Forester,’Effective Cycling’

“[Cycling] is easily the quickest way around central London, faster than bus, Tube or taxi. You can predict precisely how long every journey will take, regardless of traffic jams, Tube strikes or leaves on the line. It provides excellent exercise. It does not pollute the atmosphere. It does not clog up the streets.”
Newscaster Jeremy Paxman

Highway engineers are responsible for the nation’s obesity. They’re obsessed with roads that just encourage a sedentary lifestyle…The police want us in cars because they say there is less chance of being mugged, but if you encourage more people on to the streets, either walking or cycling, they will be safer.”
John Grimshaw, founder and chief engineer, Sustrans, ‘The Guardian’, June 8th 2005.

“MOTORISTS: Cyclists are not another species – most of them drive cars at least some of the time – and they’re not, by and large, wilfully stupid or reckless. But they experience the roads differently from you…So be patient. After all, it’s not as if getting rid of cyclists is a realistic option now – there are too many of them, and the numbers are growing all the time. And a few years down the line, as petrol gets more expensive, you might well end up as one of them yourself.”
Robert Hanks, ‘The Independent’, 12th June 2006