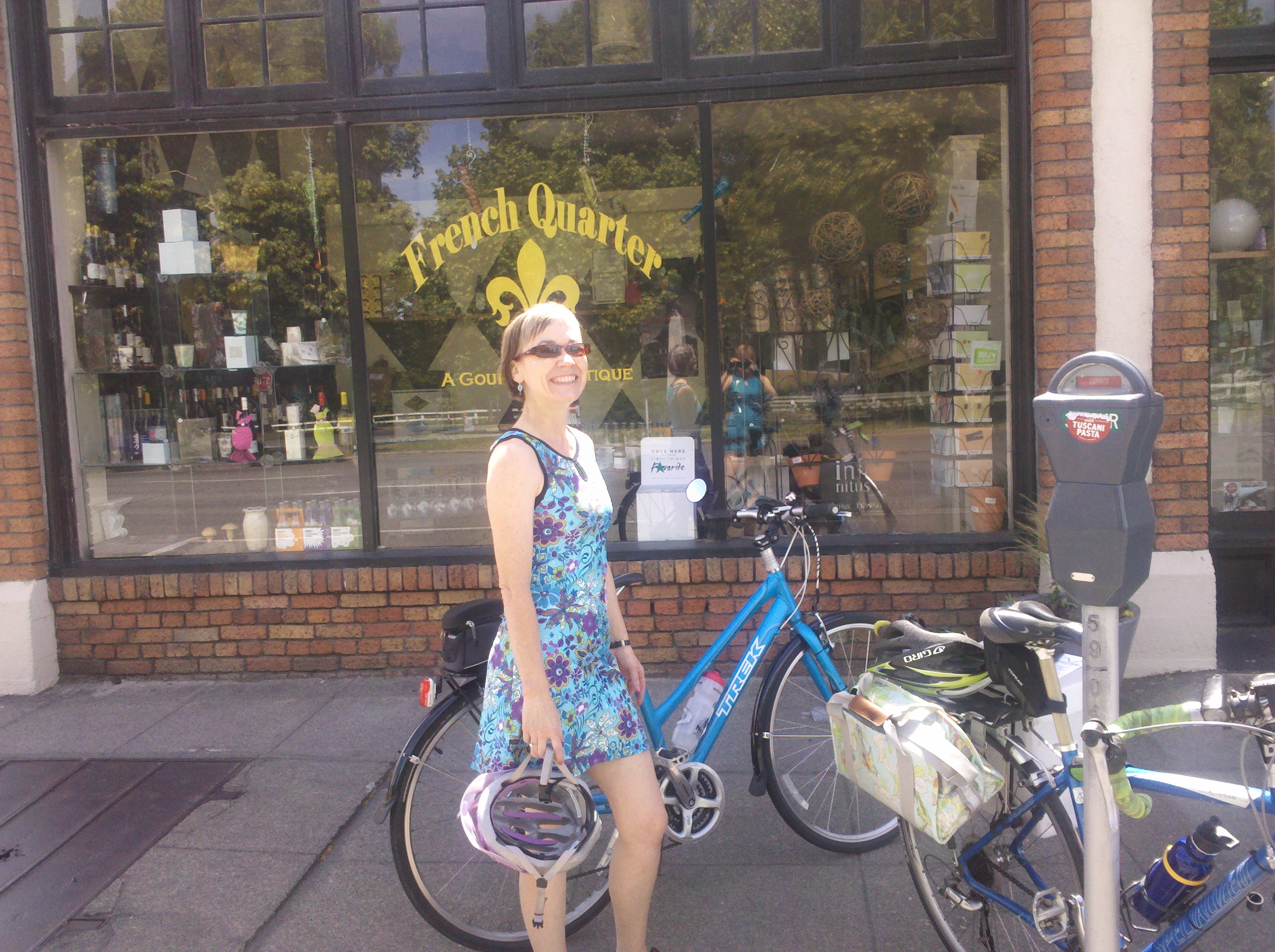 Here's Betsy bike, with Betsy! This was taken on our Bikespedition #1 and she's looking totally cute in the Bluebelle Ruu-Muu that goes with the color of her bike.

After seeing my informal impressions of Wilma’s Breezer Uptown Infinity, Betsy offered up her Trek FX for comparison. I rode it for my regular commute route three days while she was on a trip.

My impressions were a bit colored by the fact that the preceding week I hadn’t ridden at all, busy as I was with packing for our impending move to Seattle.

When I got on Betsy’s bike I was completely discombobulated by the gear shifting! The location of the shifting was different from my Specialized Dolce road bike, for one thing, with the positioning on the flat bars requiring me to use different motions.

Meanwhile, for one hand the thumb made the gears harder, for the other hand it made it easier. I found it really counterintuitive and frustrating as I constantly shifted down when I meant to get more power or vice versa.

The Breezer’s nifty little graphic representation of harder and easier gears was quite appealing by comparison with this problem child even if I did have the full run of 24 gears on the Trek, unlike the Breezer’s too-hard lowest gear. This frustration made the phrase “just like riding a bike” have very little meaning, at least as it applies to changing gears–I felt like a newbie all over again.

After three days of this shifting nonsense I mentioned it to Sweet Hubs in a tone of disgust. He said, “Well, yeah, your bike shifts just like that.”

“No, you don’t understand,” I said. I explained and re-explained just what was stupid about this shifting set-up. Then we went to my road bike, where he showed me that—yep—the shifters work exactly the same way. They push against the tension on the chain in one direction for the front rings, another for the back rings. Sure, they’re positioned differently on the handlebars so my hands make a different motion to push a lever, but that same opposite action was right there.

This must be the power of over five years of muscle memory riding just one bike. I no longer remember what it was like to ride the Dolce for the first time and can’t recall having shifting problems, although I suppose I must have given the way I struggled with the Trek. So it wasn’t the bike, it was me.

(This is shared in the interest of total information since you might go to switch types of bikes and not realize how strong this effect could be on your impressions of the new bike. It also establishes quite nicely that I’m not an expert reviewer.)

Setting aside the confusion, the Trek was a great little bike with a couple of caveats to consider.

Lighter in weight than the Breezer, although heavier than my Dolce, it was easy to pick up and carry into the house.

The shifting action (when I could remember which way to go) clicked cleanly into place with indicators that told me exactly what ring I was in on each side. On my road bike I find myself glancing down every once in a while to check which ring I’m in even though I can feel the relative difference; the Trek’s gear indicators let me stay heads-up.

Similar to the Breezer, the wider tires (35c as compared with the 25c on my road bike) smooth out the bumps nicely, and the upright posture makes it easy to see where you’re going—one of the primary reasons I’m interested in trying bikes with this configuration.

The handlebars are just too wide! I actually can’t believe they’re right for Betsy, whose shoulder width is narrower than mine. If this were my bike I’d be cutting at least an inch out of the bars to move the grips in to where they’d be comfortable. I didn’t feel I had full control of the bike with the wide grip.

It doesn’t come with a chain guard, although you could add one as an after-market item, nor does it have the built-in headlight generator the Breezer has. Trek does make a bike with both chain guard and skirt guard—the Cocoa—which I won’t even test-ride because it’s only a 3-speed and I’d never make it up the hill. It’s the commuter for flat cities, I guess.

It’s not a full step-through design although it doesn’t have the high top bar of my road bike, making it easier to straddle in a skirt. That same muscle memory makes me throw my leg up high as if I still have to clear that bar, which probably looks funny.

All in all, this is a good bike overall for city riding on rough streets and with a couple of additions and some modification it could work for me, but I’m still in the hunt.