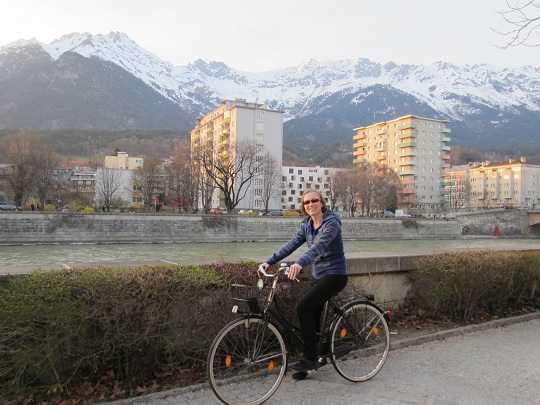 A helmetless Betsy in Austria

I have seen several cycling friends come home from a vacation in Europe with this crazed gleam in their eyes as they begin talking about their trips: “No one wears helmets in Europe” and “There are bikes everywhere in Europe” and “The cars watch out for cyclists in Europe”. Finally I was able to witness for myself what they were talking about when I went to Austria for spring break to visit my daughter and her Austrian husband.

We spent a few days in Innsbruck where they are going to school. Innsbruck is a beautiful city of about 120,000 with a large university. It is in a valley surrounded by mountains and has a history that goes back to pre-Roman times. A river runs through it, and there are narrow streets and buildings that are over a thousand years old. All this is lovely, but as a cyclist, the first thing I noticed was there are bikes everywhere. As a geographically flat college town, with expensive and very limited parking, Innsbruck is perfect for biking.

In the yard of every apartment and lining each sidewalk are rows and rows of bikes. The bikes are sturdy, a bit rattly, single speed, mostly step-through, often equipped with baskets, and look like they have been around for many years. Few are locked to anything. Instead, the owners thread cable locks between the back tire and the frame. Once locked, they can be picked up and moved, but not ridden, which seems to work just fine.

One evening my daughter went to class, and the minute she left, my son-in-law said “shall we ride the bikes?” I was delighted, and for the first time in my adult life, jumped on a bike with no helmet, and (feeling a bit naked) began my ride.

We first entered a busy street with traffic that had recently exited the autobahn. I took deep breaths as I followed him off and on sidewalks, across the busy street, through parking lots, and finally we began a lovely ride along a bike/pedestrian path beside the river. Not unlike riding Spokane’s Centennial Trail, children weaved around us, faster cyclists zipped past us, and I felt the freedom that any trail closed to cars offers. After a few lovely miles, we crossed a bridge and back into traffic and through the Old Town. We rode under the triumphforte, an arch build in 1765, saw fabulous buildings and old homes. I was reminded that there is no better way to explore a city than on a bike.

From my inaugural European-style ride I noticed a few things. Many rules I have learned as a bike commuter no longer applied. Rather than stay behind the cars in our own lane, we zipped between cars and curbs and arm signals were few. Two factors made me felt pretty visible and safe. The cars are smaller. There were no huge pickups or SUVs, which made me feel less tiny on the road. Also, there were simply lots more bikes, so I didn’t feel like a an afterthought, but instead like a part of the movement on the road.

I am beginning to understand the glow that I see in friends who have cycled in Europe. This summer I plan to rent bikes in several European towns, so watch for a blog post with more insights. In the meantime, I am back in my helmet and working to make Spokane a more bike-friendly city like Innsbruck.