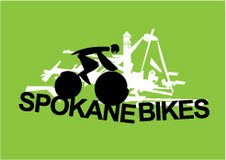 The post title is a theme we’ve used on our posters the past few years for Bike to Work Week and reflects the reason we changed our name from Bike to Work Spokane to Spokane Bikes. The Spokane Bikes philosophy is that we want to encourage people to bike for all kinds of transportation purposes, not just to and from work.

In fact, those short utility trips on a weekend—say, a run to the hardware store, fabric store, or grocery store—can be a great warm-up for transitioning into work-related riding with its greater demands for timely arrival and appropriate appearance at the end of the ride.

Once you’ve gone through that evolution from cautious beginner to full-fledged commuter, riding your bike in various kinds of conditions for different trip purposes, you might get a great week like what I had for this year’s Bike to Work Week.

Monday: In our fifth year we continued the “tradition” of having somewhat (ahem) moistish atmospheric conditions for the Kickoff Breakfast. But we didn’t get rained on. Not really.

Mayor David Condon, City Council President, and City Council member Jon Snyder all spoke, Pedals2People ran the bike corral, Spokane Transit had a bus parked for people to practice putting a bike on the rack (first transit agency in the state to have racks on every bus, in fact!), we instituted composting for our paper and food throwaways, and we got the week rolling.

I got to chat with stalwart Marc Mims, who every year leads a contingent of Spokane Valley-ites all the way to downtown for Mountain Gear pancakes and Roast House “Ride the Edge” coffee. This year he rode downtown alone—blame those threatening skies at the hour he had to leave to be downtown before 7 a.m.—but Amy Biviano, candidate for the State House of Representatives in the 4th legislative district who had ridden in separately, rode back with him.

Tuesday: Incredibly windy! Strong enough that when Belles and Baskets founder Betsy and I met up to have coffee, I have to ‘fess up that we wrestled my bike into the trunk of her little Honda Civic and drove together rather than me fighting my way to our rendezvous.

It was probably an entertaining sight to watch us load up, as my Donkey Boxx—while uber-awesome for hauling stuff—adds to the challenge of working with the hatch configuration of the Civic.

Further confession: I missed the Belles and Baskets group ride on the Fish Lake Trail in the evening and the post-ride chat at the bike-friendly Elk Public House, having gone home early and gotten comfy while I worked on some deadline-driven projects. I know, ladies, I missed out. Another time!

Wednesday: Energizer Stations! My sweetheart and I biked down together and stopped at Rings & Things (designated a Bike-Friendly Business by the League of American Bicyclists), where Polly and Amy served up Roast House coffee and bananas with the help of young Zander. For a good laugh read Marc Mims’ tale of coffee delivery woe, and shed a little tear over the spilled elixir of life.

The forecast for the day had some rain in it and I had quite a few meetings out of the office, but I had one of those lucky days where every time it rained I was inside and by the time I needed to ride the streets were drying out again. Biking has definitely made me far more weather-conscious.

At the end of the day, riding home around 7:45 p.m. from a LaunchPad event at Mobius Science Center (I can’t wait ’til it opens! Our kids are gonna love it), I saw the kinds of sights I’m sure I often missed as a driver, including a young African-American kid with one of the glossiest and most beautiful sets of long braids I’ve ever seen spinning along on a small bike and stopping to talk with his friends, and a double rainbow to the south over the freeway.

Eastbound on Fourth at Stevens I rolled alongside a man on the sidewalk who spun his wheelchair rapidly past Lewis and Clark High School, wearing a crisp white shirt and black dress pants. At the stoplight I wasn’t sure if the driver waiting behind me to turn right saw my wheeled companion since I might be blocking the view, so when the light turned green I moved slowly into the intersection to ride interference for a few yards before accelerating.

Thursday: An early-morning breakfast meeting followed by yet another meeting at Atticus Coffee, a regular stop for me thanks to the bike rack out front and the Roast House coffee served inside. (Yes, this is a recurring theme. I ride caffeinated and Roast House totally rocks the support for local bike events.)

After another busy day at work—busy because I was taking Friday off and had to pound out quite a few things before leaving for a four-day weekend—I headed to the always-rewarding Bike to Work Wrap-Up Party at Steam Plant Grill, one of our founding sponsors who every years throws a bike party for us and pours the beer they brew in-house.

I love that party. There are the regulars who have been there since the beginning, the ones who started riding that first year and have become regulars, the long-time bike advocates who’ve been at this far longer than I like Spokane Bike Buddy Eileen Hyatt, and the newbies who are thrilled with their accomplishments in their first-ever week of riding.

Spokane Public Radio, another important sponsor for Bike to Work Week, gave us some goodie bags to give away at the event. We weren’t doing a full-on raffle so co-chair Erika Prins and I hatched an idea: We would give the bags to people who have founded or established something that is making a difference and expanding opportunities and motivation to ride. Our list (and there would have been more had we had more goodies):

Friday: Stayed home, attended to the Women’s Bike Blogs list so I can keep highlighting featured blogs and adding to the RSS feed on Twitter and Facebook (from a list that will number over 700 the next time I post an update!), and did other bike-related word work like this post. I wish I’d had time to ride since we had some nice sunshine, but reflecting back on the week is worth the time.

Work to eat. Eat to live. Live to bike. Bike to work (and everything else). Happy biking!