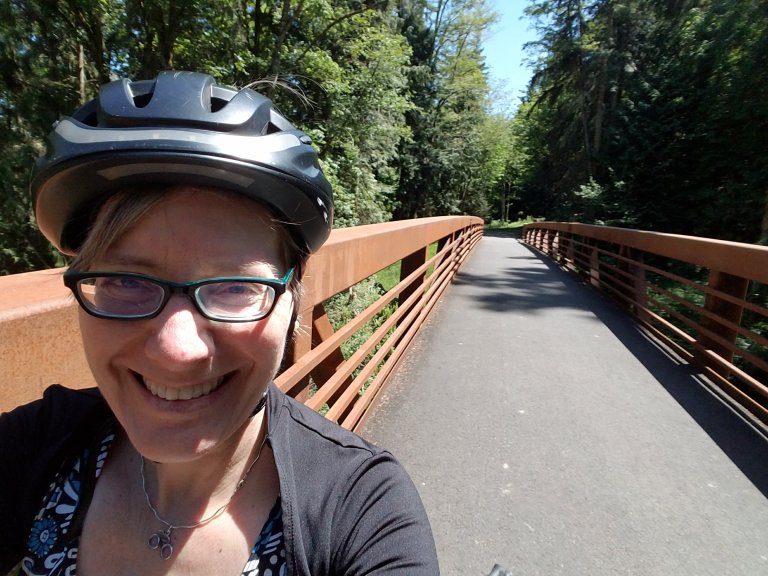 The goal of bicycling in every county in Washington state gives me one thing to shoot for. As I wrote that post I realized how often my clearest memory of biking in a particular county is tied to its trails.

So why not set an additional goal — one I hope takes a lot longer because I expect the state’s trail networks to keep growing and growing until they all connect — of riding every named trail in the state? Every trail-ish, that is.

TrailLink, created by the good folks at Rails to Trails Conservancy, provided a robust starting point for this list. Their interface and app let you sort by activities and trail surface as well as location. It doesn’t list every trail in the state, though, so I did some additional searching. Another useful list of Pacific NW trails curated by Dan Crawford gave me some more. And for the last five and a half years I’ve worked with bike and trail advocates from around the state so I have great news items showing up in my social media feeds on a regular basis.

Below is a first run at my Washington trails #BikeIt list. As with my #BikeIt list for riding in every county in Washington state, I’m using boldface to indicate those I’ve already ridden.

Some links go to maps or information on the TrailLink site, which is handy for the reviews people post. Some go to a site maintained by a Friends of This Trail group, a news article with some interesting information, or my own post about riding a particular trail. I’ve included a location in parentheses where that isn’t part of the trail name. You’ll also find a list of bike maps linked on the WSDOT site.

Some trails are being developed in segments that result in multiple listings for the same trail name, different chunks. Imagine when these all connect!

A few things you’ll notice: Washington state loves its riverwalks, greenways and rail-trails, and the state Centennial celebration resulted in more than one trail dedication. My first trail volunteer work was on the North Idaho Centennial Trail Committee working to extend the Spokane River Centennial Trail and I’m happy to have ridden both Centennial Trails in Washington.

Wow, I’ve only ridden 45 out of the 123 that meet my criteria — 36.58%. That’s not as high a percentage of completion as my Washington counties tally. I’d better get riding.

I’ll come back to update this as I cover more ground. If you have an event or excuse to ride one of the ones I haven’t yet gotten to, let me know.

Your moment of Zen, courtesy of the Spokane River and the Centennial Trail. Chairs and picnic tables at this spot invite you to linger with the view and the soothing roar of the river. To have this on a trail through the heart of downtown! #bikeSPO pic.twitter.com/qfXslmnue2

It’s not an exaggeration to say that riding on a trail for me is an emotionally moving experience. Loving the small social interactions and the variety of people on the Chehalis Western Trail. pic.twitter.com/1SYSl5IAQe