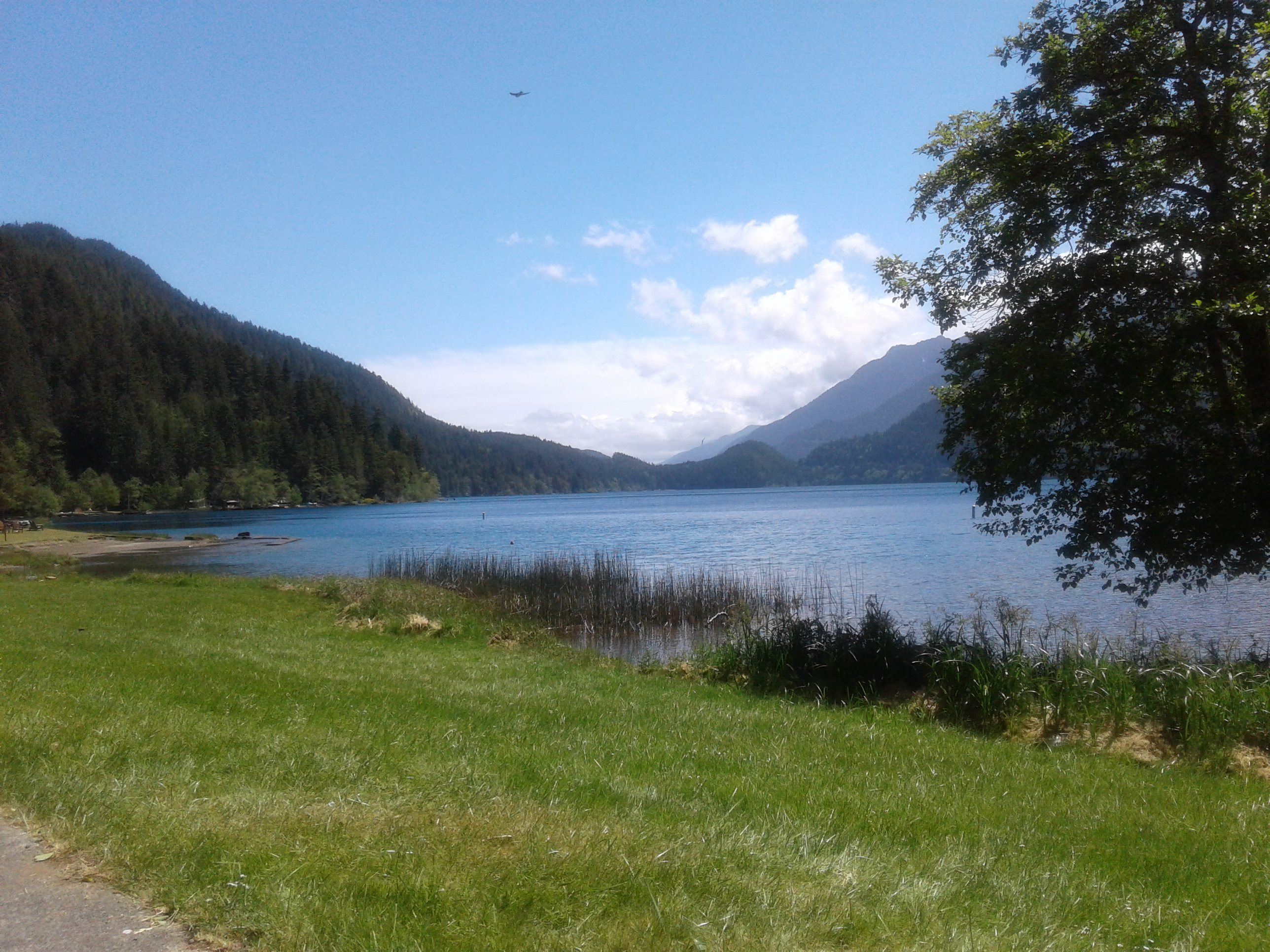 Lake Crescent is so beautiful!

Day 5 mileage amounted to zero, giving my legs (and saddle area) a welcome break. I did an hour of yoga outside in the sunshine by the gorgeous lake, feeling the stretch in hip flexors and in any posture that opened my body away from the forward/back of biking movements.

I had tentatively planned that we might go check out the Spruce Railroad Trail. However, after covering 155+ miles in four days, spending a day relaxing and recharging seemed like a better plan. Besides, the trail has some construction and we can save the experience for another day when we can ride the whole thing.

Because we will go back to Lake Crescent. The peace and quiet, the many birds swooping, calling and paddling by our little A-frame on the shore, the beauty will draw us back. Based on the car traffic we saw on the other shore I think we’ll head for the Log Cabin Resort again. It’s less well known than the Lake Crescent Lodge but it was comfortable, the food was good, and the service from every friendly staff person was both personal and professional.

Day 6 we tanked up at the breakfast buffet — loved the mixed potatoes of all colors as one of the dishes, along with good steel-cut oats (not those pasty packets), scrambled eggs, and cute little cinnamon rolls, properly raisin-free.

We rolled out on a different route for the return to Port Angeles, taking the Joyce-Piedmont Road, State Route 112, and quiet back roads designated to serve as portions of the Olympic Discovery Trail. The beginning of the ride gave us quite a climb but since only two drivers overtook us the winding road with no shoulder felt more like a really wide bike lane than anything for motor vehicles.

The route overall had a lot more downhill or flat than uphill — which means if we had taken this route two days ago we would have had a seemingly never-ending climb rather than the ups and downs we had on State Route 101.

Most of the way we had an acceptable shoulder of a couple of feet. Coupled with long stretches of no cars passing us, this made for an enjoyable ride. I counted a total of five logging trucks that passed, and in each instance the driver considerately moved well away from the shoulder to overtake us. Many drivers did the same, although it was a mixed bag.

Lower Elwha Road gave us both a scenic bridge with a good shoulder followed by a steep, winding climb with no shoulder but again only one driver, who waited until we waved to him that there were no oncoming cars so it was safe to pass, and another batch of freshly laid silken road surface for a stretch.

Then we picked up the Olympic Discovery Trail for a final beautiful push into Port Angeles. The trail uses local streets for some portions, while others take you through a leafy, emerald-green tunnel.

Since this wasn’t a high-mileage day we had some time to fill. By the time we got to town we were hungry again so we returned to New Day Eatery for lunch. Hubs then spent time with a programming problem he has set himself — something to do with customizing a flight simulator experience — while I explored a couple of antique stores.

I kinda sorta collect apples in various media, something that started with a marble apple paperweight I bought myself early in my grown-up working life. The count stayed at just three for years until it became a game to see if I could find them in thrift and antique shops. And sure enough, if you look diligently you can usually find one. Or two, today.

We needed to get a patch cable to be able to download photos from Hubs’s digital camera so we did some bike erranding. This involved using the bike lanes conveniently striped on both sides of State Route 101 to get first to one place that didn’t have the cable, then to a small shopping mall that did.

The return trip presented a bit more of a challenge, one of those examples of why you’ll see people bicycling on sidewalks because that’s the most direct route to get you back on track when you can’t get through traffic across a multi-lane highway with no traffic light.

One more time at New Day for more coffee, and I went around the corner to a couple of local art galleries. Then it was time to get in line for the Black Ball Ferry to Victoria. A few things to know about doing this:

– It’s super easy, almost as easy as Washington State Ferries but with the customs and passport business. Customs is a form on the US side, questions similar to the form on the Canadian arrival side.

– They have bike racks on the front of the vessel. The wind gets pretty strong so do more than just use the rope that’s provided — I suggest locking not for theft prevention but to hold the bike up, and if there aren’t many bikes I’d turn it sideways against the rack.

– They don’t stamp your passport going into Canada! This was my first time ever using my passport and I have to say this was a disappointment even though getting a stamp from Canada would be kind of like getting a hug from your brother — it’s warm and friendly and all, but not a romantic thrill. (No offense, Canada. I think of you as the kinder, gentler North Americans. You’re like a brother to me.) I hope to fill up my book with stamps from other, less platonic countries in the future. We have since heard that you can ask for the stamp — if only we had known. Which is why I’m telling you here.

– It’s around 25 miles across enough water that if you’re prone to motion sickness it may get you. The vessel did some plunging along for a while, giving me a little flashback to family camping trips when my dad would chain smoke and we’d have to pull over every so often for my younger sister or I to deposit lunch by the side of the road. But it smoothed out and we got the bonus of seeing a submarine patrolling, escorted by three ships. Since Hubs’s dad served in submarines in the US Navy this was pretty cool. A nice Canadian man named Tom loaned Hubs his binoculars to help him get a closer look.

And here we are in Victoria! We’re at a little inn just a few blocks from the Inner Harbour and hoping the 22% chance of rain in tomorrow’s forecast doesn’t materialize so we can enjoy wandering around a bit.