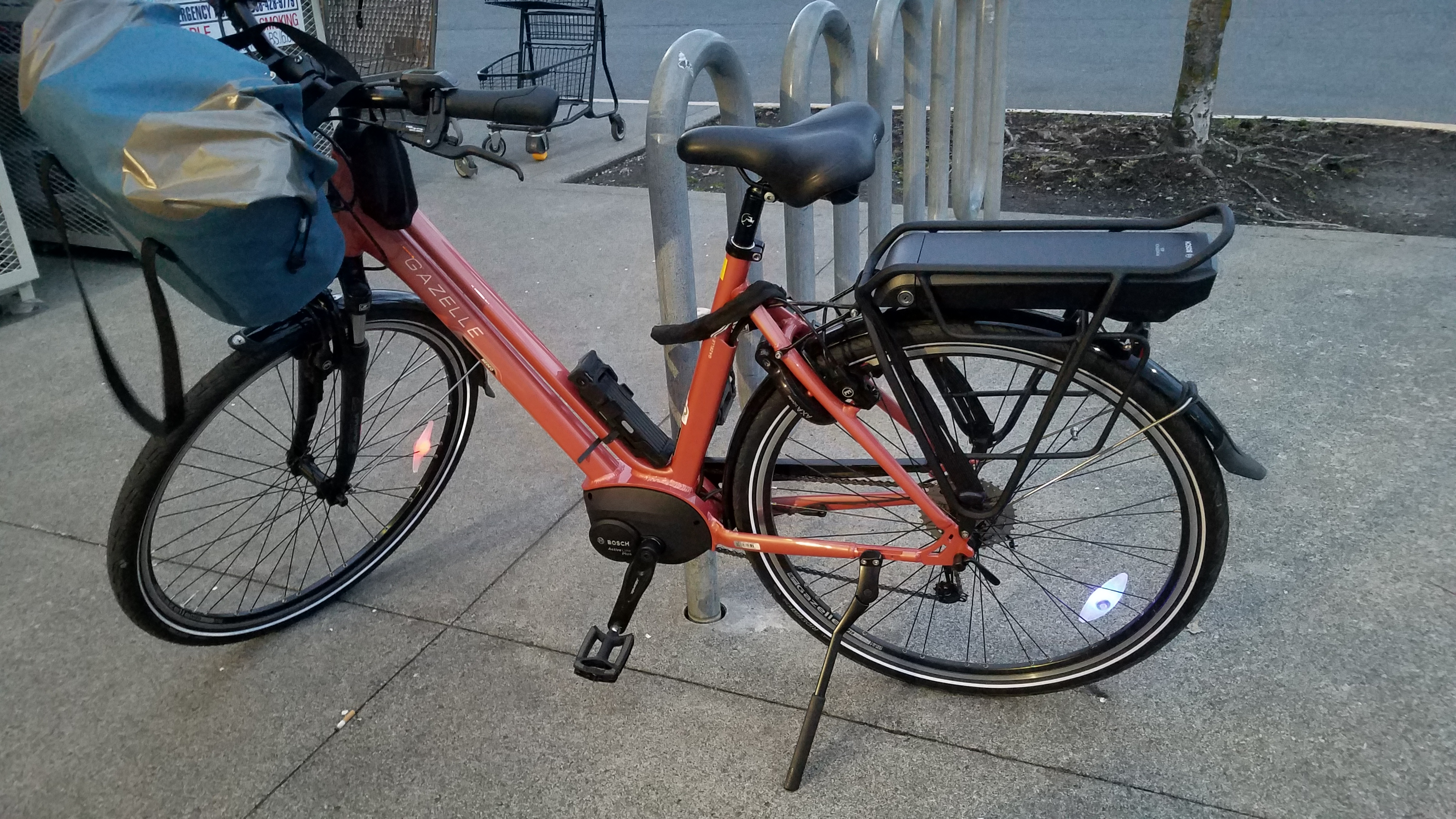 I strode into the house after a day in Olympia, shedding work bags and jacket and heading straight for a change of clothing to run to the grocery store. Not that I really had to change to go ride, mind you, since my entire wardrobe is bike friendly — more that I wanted to change my mental gears and putting on work-day’s-over clothes provides a transition. I also wanted to get out on my bike ahead of the storm front that darkened part of the sky. I loaded Zelda with two bags on the back rack, threw the rain skirt into the big front bag just in case, and pedaled up our little street and south to the grocery store.

I have a choice to make when I need groceries. I can go to one that’s a hair over two miles away. If I want to load up on a fair number of different kinds of things, including items on the dry-goods side, I have to go to the big store about 20 blocks farther south. The entrance and parking lot of the bigger store sit on a much wider and busier street, with a lot more drivers making decisions that could change my life in a second. It’s simply not a comfortable bike destination, although most of the route there is fine (I don’t have to ride on that arterial until the very end) and I’ve ridden there a number of times anyway.

The down side to the closer grocery store in a quieter location: That’s the one with higher prices. I’m fortunate to be able to choose to buy time and a less stressful ride by paying more for the groceries if I don’t want to go farther south, but I look at the families in that store and wish they were getting the same deal I get when I do go that extra distance.

I like the smaller size of this store, though, and I meandered through looking for the vegetables and other items I needed to pick up. A delicious lunchtime Dan-Dan bowl at the Wayside, a vegan restaurant in Olympia, had left me wanting something involving Thai peanut sauce. I had all the ingredients to make that, just needed something to put it on.

When I got out to the bike I realized I had left my spoke lights turned on and they had been softly glowing through their color changes the whole time I’d been in the store. No doubt this created some entertainment for other shoppers, particularly little kids. I saddled up and headed north, again appreciating the little boost I can get when I hit a hill.

The rain never came down but the wind blew, the temperature had dropped quite a bit while I was in the store, and I was glad I hadn’t made the extra long journey. A quick little jaunt, really, no big deal. Soon I was home sauteing the vegetables and tofu that would form the carrier for that Thai peanut sauce.

No big deal. And that’s just it. Over the years I’ve made adjustments, purchased gear, learned how to choose a route for my bike ride or judge the weather (most days) or position my bike in the right place on the street so drivers can see me as they come upon me. All of those by now unconscious and intuitive acts that add up to a good bike ride there and back again.

When I was new at all of this riding took a lot more individual decisions. I planned for more contingencies because I didn’t have as much experience dealing with things. Each decision and possibility in essence represented a barrier to actually getting out the door and going for the ride. Lower those barriers through experience, and jumping on the bike to run to the grocery store is truly as easy as picking up the car keys and pulling out of the driveway.

Easier, really, because at the store I can park at the bike rack that is near the door and I will know exactly where I parked when I come back out instead of hunting in the fading light trying to remember how far I had to walk from the car and from which angle I approached the front door. (Don’t tell me I’m the only one who’s ever forgotten where I parked and had to search an entire parking lot for a car that looks a lot like most of the other cars in that lot. Doesn’t happen on my bicycle.)