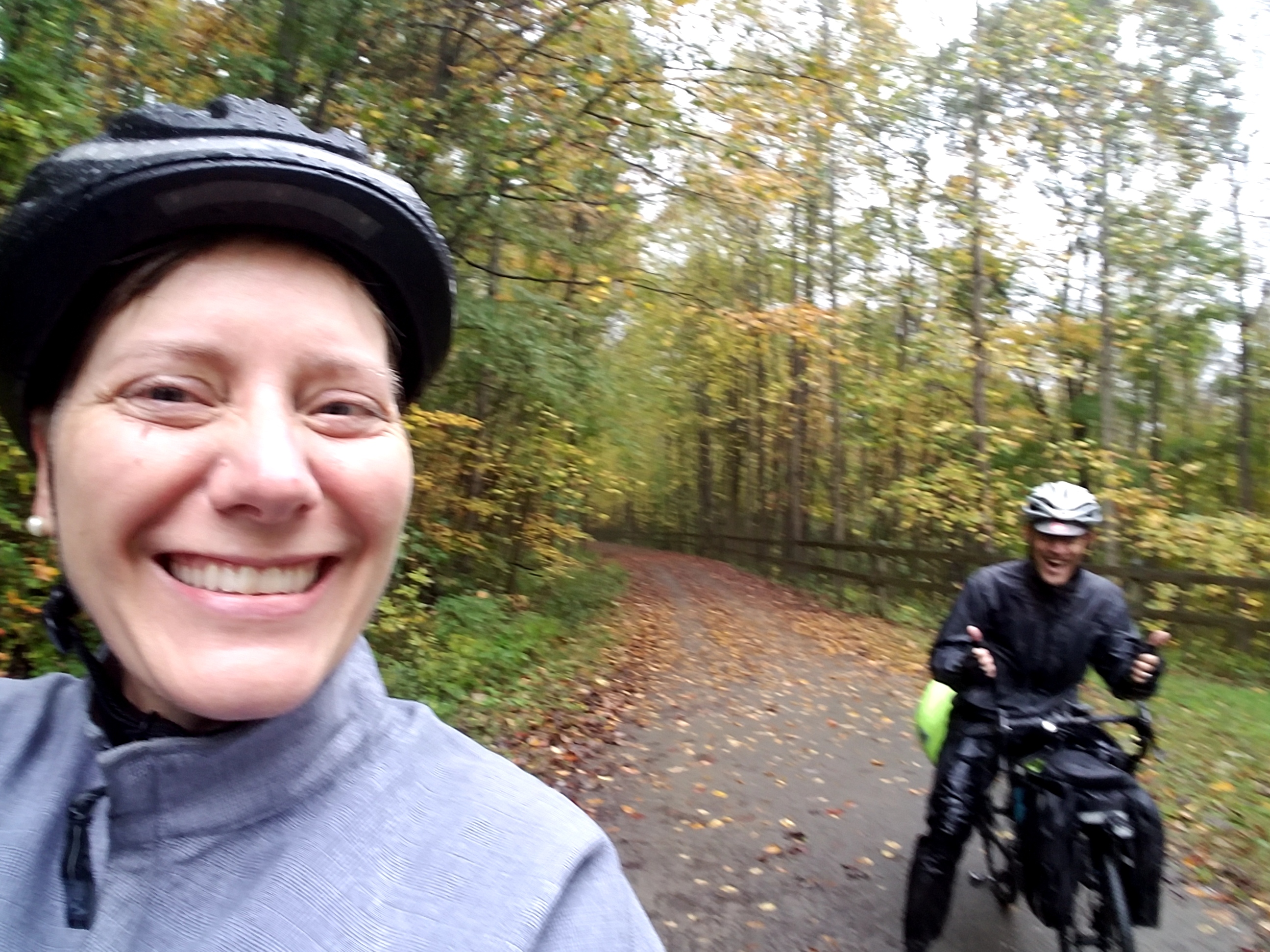 We’re another 43 miles down the road, just a day’s ride from the end of the Great Allegheny Passage, and damp outerwear is draped on the shower rod with a load of laundry waiting to be done. First things first though–we laid plans for drinks and dinner with Lara and Keith, friends made along the way who are riding the same itinerary and also love comic book movies, so we know we’re compatible.

Today started with rain that hit just as we finished breakfast. It sounds funny to say we lucked out, but with that timing we could gear up before leaving rather than having to stop and dig that stuff out. No matter how well organized you are that takes a few minutes during which you’re getting wetter and wetter.

And wet we got, although it’s really warm compared to cold Seattle drizzle so suffering is less than it could be. At one point the forecast indicated we’d hit rain associated with Tropical Rainstorm Nate. It has been a goal of mine to avoid all named weather events–it was enough disaster living through events that get their anniversaries recognized in the news, like Firestorm ’91 and Ice Storm. I don’t know if this rain came from Nate and it seemed ordinary enough, so I thought my goal remained attainable. And I appreciate my Wander Wrap more every time I use it.

The sun came out as we ate lunch in Rockwood and we had some real warmth, then clouds circled back in and we ended in Meyersdale under gray skies.

It could have been worse–we could have had Lara’s ride with a blowout yesterday, a flat today and then a total tire failure that left them waiting on the trail for Bike the GAP to send roadside assistance. We stayed with them a while trying to think of ways to troubleshoot–patches and tire boots were already deployed and were not going to work–then pedaled rapidly the last 5 miles to Meyersdale hoping to find a tire or some other fix. By the time we arrived they had help and were about a half-hour behind us.

Clearly this called for a celebration. We had purchased a couple of bottles of wine in Rockwood (pro tip: in Pennsylvania you cannot assume carry-out alcohol will be available for purchase in every small town, so plan ahead) so we popped the corks. Then we were off to dinner at Morguen Toole, in a building that had been a morgue and a tool place, hence the name. More wine, more laughing, lots of fun. We came out of the restaurant to an absolute downpour, a real gullywasher, and raced through the drenching to our B&B and the smell of muffins baking for tomorrow morning.

Tomorrow we reach Cumberland, finishing the GAP and starting the C&O Towpath. That will be a rougher ride, less level and more like a Forest Service road.

I’m feeling stronger every day and have no concerns about finishing the trip as far as my physical capacity, although I’m glad we didn’t commit to a hardcore schedule that would have required me to cover 60 or 70 miles a day. We’re already talking about where we should ride for next year’s vacation.

I learned several years ago that a trail of 50 miles or more is long enough to be a destination and now I really believe it. Now that I’ve experienced this, it’s what I want in a bike vacation.

Washington has some incredible assets that can be this kind of draw, from the Olympic Discovery Trail to the John Wayne Pioneer Trail to the network linking Spokane and north Idaho, and the networks are growing. When the Eastside Rail Corridor is finished and connects to the rest of the trails in King County and up to Snohomish County, it will include a jaw -dropping trestle and scenic views. As Tahoma to Tacoma is completed we’ll have a trail linking Puget Sound to Mount Rainier National Park. And the list goes on in Kitsap County, Wenatchee Valley, Walla Walla…. The more miles and networks the merrier, as far as I’m concerned.

Merrier for the economy too, not just for riders. Bike tourism rings cash registers thanks to wallets on wheels rolling into town. The owner of the B&B we stayed at in Confluence said her business has doubled every year since the completion of the GAP. In Ohiopyle, population 59, there are at least five places to rent a bike, including the motel we stayed at.

Want your tiny town to thrive, or at least support a grocery store so you don’t have to travel 50 miles for a gallon of milk? See if you can help it become a trail town. Pennsylvania has the model.