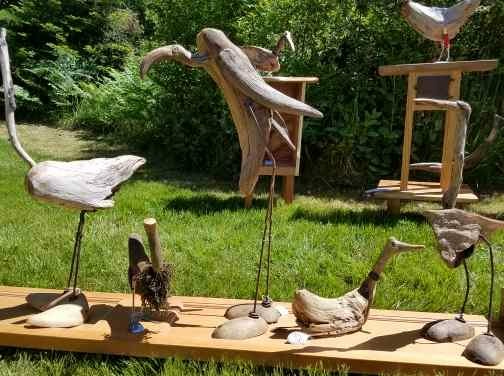 We lucked into a really great weekend to be in Friday Harbor, sunny weather Saturday coinciding with the San Juan Islands Artists Studio Tour. Hubs went off on his bike to explore the local airstrip while my sister, her boyfriend and I visited studio after studio to see the talents of artists in a wide variety of media. I benefited the local arts economy with a few purchases along the way and we enjoyed talking to the artists and seeing their works in progress.

The tour, always held the first weekend in June and promoted with a handy map, could make for a great excuse to explore various parts of the island by bike and I bet the artists could ship a larger purchase. And jewelry, smaller prints and some of the other things I saw can fit in a pannier with careful planning and packing. Trust me — this is firsthand knowledge speaking.

We lunched in the sunshine at the new Downriggers overlooking the harbor (it replaced the old Downriggers, which we ate at pretty much every time I’ve visited over the decades my sister has lived here). My portabello mushroom burger, juicy and delicious, was accompanied by a giant heap of homemade potato chips — yummy.

Bakery San Juan provided fantastic pizzas for dinner and a ginormous apple butter tart we really meant to save for breakfast…. With its sunny dining room and location next to the San Juan Food Co-op just over a half-mile from the ferry landing, the bakery makes a great refueling station for bike travelers. It’s by the airstrip so if you want to watch tiny planes landing and taking off you’ll find some additional entertainment value.

Sunday dawned overcast and then the sprinkles started to come down enough to be called real rain. When you’re staying with family you can just hang out and watch home remodeling shows and it makes for a good day, especially entertaining as we evaluated whether the various couples in “First Time Flippers” would stay married after their projects ran many months over schedule and thousands of dollars over budget.

We had our choice of multiple ferry times and we looked at the hourly forecast to try to slip between the raindrops. Very short ride — my sister lives just a mile from the ferry landing, then we had the 7.5-mile crossing to Lopez and a ride of about 8 miles past the village to our AirBnB spot out on Peninsula Road.

Clean laundry repacked and the apple tart demolished, we donned rain jackets. As it turned out, the heaviest rain we encountered fell during the 7-minute ride to the ferry landing.

Since we were heading to Lopez on a vessel that continued on to Anacortes, we were instructed to park at the end where we loaded.

Washington State Ferries bike travel tip: Where to park your bike after loading is one of the things to ask just to be sure you’re in the correct location; on an island run people will be disembarking in various places and being in the right spot helps keep things running on schedule. And if you’re at the wrong end with a lot of cars parked in the middle you have a real struggle ahead that you could have prevented.

Smooth crossing of around 40 minutes — alas, no orcas, seals, or other wildlife entertainment.

A RidewithGPS tour of Lopez Island posted by bike travel writer Bill Thorness of Seattle gave us a heads-up about the climb up from the ferry landing. To be sure, we expect that at every ferry landing given that they’re all at sea level and western Washington has plenty of mountainous terrain.

Some are longer climbs, though, and this is one. Eric had terrain detail up on his Garmin so we can report that the initial grade is 4-5 percent, then a flat bit, then about 7 percent as you wind around a few curves. After that initial climb up and away from the landing, the terrain flattened with just a few small climbs here and there.

True to the island’s “Slow-pez” nickname, we encountered almost zero traffic. I think a grand total of three cars overtook us, with a few more passing going the other direction but no one speeding or driving too close to us. The shoulders on the chip-seal road were around two feet much of the way, sometimes three — more than adequate since we basically had the entire road to ourselves.

We stopped at Blossom Grocery to stock up on cheese and crackers for snack attacks, then at The Galley for dinner. Eric enjoyed his chicken enchiladas and my veggie fajita wrap was so big I had to save half of it for later.

The sky had been steadily clearing as we rode and then ate, and we had blue skies overhead as we turned onto the narrow spit that led to our AirBnB destination. So beautiful and peaceful we may not want to leave.

Distance: 9 miles by bike today, nothing for me yesterday

Wildlife: Plenty of birdsong and frogs peeping around our stay on Lopez. Very cool to hear deep-voiced bullfrogs calling in a pond at one of the artist studio stops Saturday.

Yesterday: From Victoria to Friday Harbor