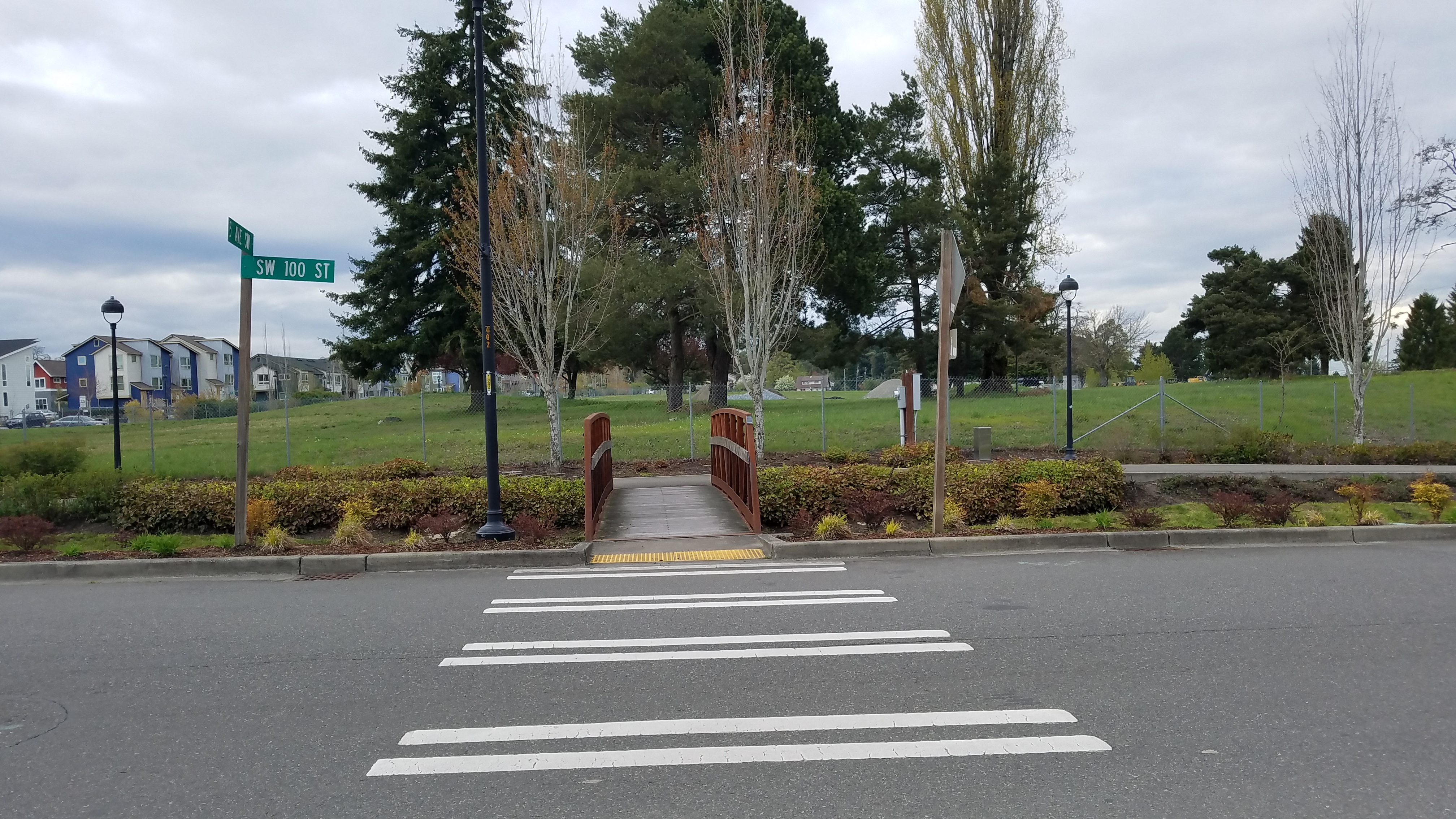 My life and my work really do run on the same road. Today made that especially obvious: I went from a morning meeting with WSDOT colleagues that included discussions of what makes for a more pleasant and lower-stress walking or biking experience to an afternoon bike ride in which I made a route change based on street design and traffic stress levels.

Remembering my little frog chorus from the other night, when I set off on Zelda to take myself out for a coffee treat at the end of the day I took a different route to Dubsea Coffee than my usual one in which I stay on through streets. I turned down that same side street and discovered something I hadn’t noticed on my night ride: A tiny bridge span over a bioswale, or what in my younger days I would have called a ditch with grass in it. Go across that bridge and you can walk or roll on a pathway separated from the general traffic.

I rode across to the path and turned left. It took me to the corner of the same street I could have just ridden on, but it’s much more fun to go over a little bridge and on a little path. And had people been driving on that street, the little path would have felt that much more comfortable because it gave me a space away from where those drivers would be moving their two-ton and four-ton steel boxes. In transpo-speak we would call this a lower level of bicycle traffic stress.

The other night when the frogs were singing and the raindrops kept falling on my head I hadn’t ridden up this street to discover where it went. Today I took the road less traveled — at least, less traveled by me up until now — and found that it came out at the other end of the block where Dubsea Coffee stands.

Parked at the rack out front (a signal that bike customers are invited to spend money here), went inside, had my cardamom latte and a big treat. And I do mean big: a giant snickerdoodle that was done perfectly, meaning it was still bendy in the middle, not baked to a hard crunchy unsatisfactory texture. First I had a conversation with the nice young woman behind the counter, who had never tasted a snickerdoodle and hence did not know about this all-important quality control criterion. She let me handle the cookie (with napkins) to test its bendiness before I committed to the purchase.

This is also the point at which I should refer to a blog post from last year in which I discussed how years ago I conquered a weakness for snickerdoodles by tracking their consumption as if this represented a workplace safety incident.

I used my time at the coffee shop to collect my thoughts from another week working on the state Active Transportation Plan update and to think about how we will promote the survey we will be asking Washington residents to take. Hint: If you live in Washington you should take this survey and share it with at least three other people. It’s available now in English; we’ll add other translations on the plan information page as we complete them.

When Zelda and I left to go home I started to take my usual route, which would involve riding south along 8th Ave. SW from Dubsea Coffee. That street has a nice traffic-calming vibe in this stretch, with a number of bus stops, housing, small businesses, and the schoolyard for White Center Height Elementary.

As the street gets closer to SW 102nd the surface gets pretty bad — overdue for maintenance and it gets hard to maintain a consistent lane position with the many holes. My turn east at the corner brings me out onto 102nd, which has up and down rolling hills. Drivers can speed up going down those rollers and end up driving over the speed limit. Not an awful street, mind you, just not a great street. Not without its stresses.

I had ridden halfway toward that turn when it dawned on me. I checked for drivers fore and aft, made a U-turn in the empty street, pedaled back toward Dubsea, and turned onto that nice quiet little neighborhood street I had used on my ride to treats. The one with the cute bridge, the separated path if that’s what I wanted or needed. The one with neighbors walking their dogs, maybe even some frogs singing, although today was pretty cold and they were quiet.

I may never ride on that particular stretch of 102nd SW again now that I’ve discovered how much nicer a parallel route is. 100th SW isn’t a perfectly straight street — it has a slight curve, which slows drivers and keeps them from using this as a cut-through to avoid the stop sign. The street has sidewalks separated from the vehicle traffic by a grassy strip, making it a nicer place to walk and providing the visual reminder to drivers that people do in fact walk here. 102nd SW doesn’t have any sidewalks. People walk on it — they have no choice because this street carries the buses — but they have to walk in the shoulder, which narrows to nonexistent in places and often has cars parked there.

All of these factors came up in the morning meeting when I asked people to describe a recent trip walking or rolling. I asked everyone in the room to listen for the issues of infrastructure design, operations and maintenance that make a stretch of roadway work, or not work, for people using active transportation. They described gaps in the connections, high-stress segments, barriers and successes.

One man, a relatively confident bicycle rider, described a multimodal ride during which he couldn’t put his bike on the bus because the rack was full. He waited an hour for the next bus because he wouldn’t ride on a particular stretch of road where no bike infrastructure, no shoulder, provides him space for separation from drivers. Another mentioned he ended up sitting out a whole quarter of college after he broke his leg and couldn’t make it work to get to and from his classes in time. Someone else contributed a story about how much people walk in La Conner, including older people who can no longer drive, because they’ve spent years improving the walkability and making it possible to get from one end of town to the other without a car.

I took the road less traveled, thanks to my misty night ride a couple of nights ago with no particular destination in mind. Turning down a different street just because I could — one of the great joys of riding my bike — gave me a whole new way to get somewhere.

You might try it the next time you go out the door. Who knows what better connections could change your transportation habits? Take it a step further: What if your town worked actively to provide complete, comfortable connections to places you need to get to? What would that do for you and your neighbors? What roads would you travel?

PS: Seriously, if you live in Washington take the survey by June 30, 2019, and send the link to your family, friends and neighbors. It will only take 10 minutes. I can’t change the street to your favorite coffee shop with a survey, but plans do affect policies and policies do affect projects and all of them do eventually change what happens for active transportation.