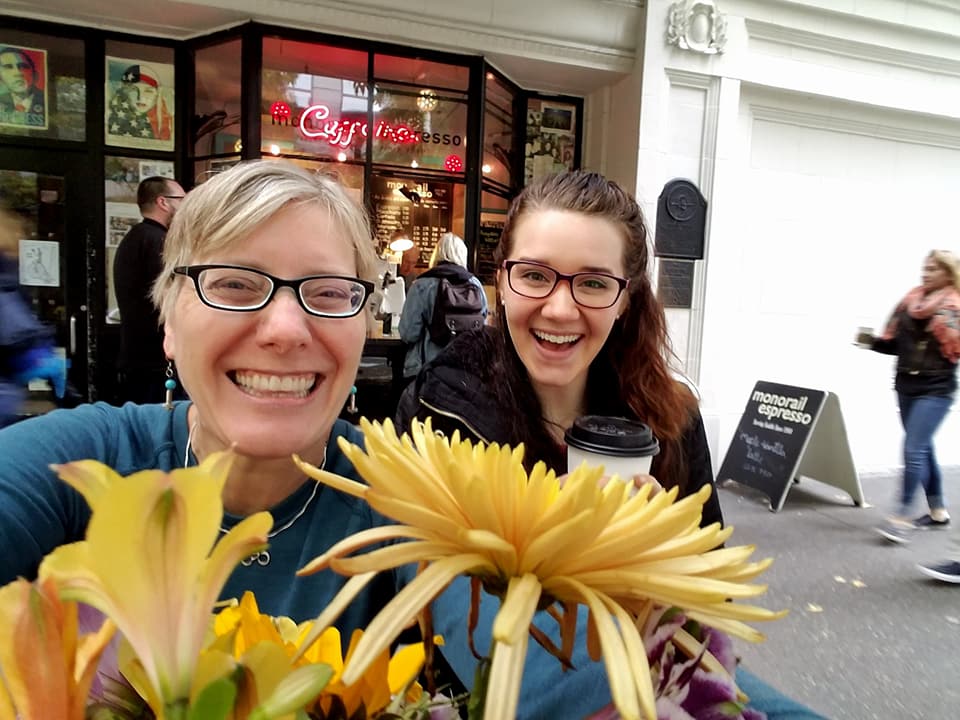 With the first two #coffeeneuring stops accomplished as part of an epic trek, the rest likely won’t be quite so dramatic. That’s fine since mileage and drama aren’t really the point.

Coffeeneuring #3: Saturday Sweet Hubs and I set out to discover just how the Duwamish Trail connects to the Green River Trail, planning to come back through Burien for coffee and a grocery stop on the way home. The sun shone, the fall colors glowed, at least half of our 20 miles was on separated trails, and my road bike on pavement with empty panniers weighed nothing compared to a laden hybrid on an unpaved trail.

No idea how long this comparison to the trail experience will keep being something I notice on the bike. It’s one of the lingering aftereffects I really appreciate.

I will, however, confess that I had to get off and push my bike up the monstrous climbs that lie between the Green River Trail and Burien. Flat mileage definitely didn’t train me up for those grades. Holy Alps, Batman! Check out the profile in the map at the bottom and you’ll see that this is no joke– I hoofed it up more than a 14% climb at one point.

Bonus: Downtown Burien sidewalks were alive with kids in costumes for Boo in Burien. We sat at the window of Burien Press, one of our regular destinations because they have a bike rack right in front courtesy of Walk Bike Burien, and admired the creativity. (Note to restaurants and coffee shops: Installing a bike rack out front sends a strong message to me that you welcome my spending.) A very unscientific tally suggests that Spiderman and princesses are big this year.

#Coffeeneuring #3: Long explore Duwamish Trail to Green River Trail, then into Burien where Trunk or Treat is in full swing. pic.twitter.com/RsGCC6Y0Vi

Coffeeneuring #4: As a bit of a pre-birthday present to myself I got tickets to see “Ragtime” with Second Daughter, the musical theater graduate. She recently moved into her own place so I loaded one pannier with things she forgot to take with her and shot a quick text: “Pick a coffee place close to 5th Ave and I’ll meet you there.”

The day had dawned foggy but it wasn’t raining, which made the ride cool and pleasant. On the West Seattle Bridge I saw a father and his small son riding ahead of me. I caught them at the traffic light and we chatted a bit. They were riding to the Seahawks home game, the boy (maybe 8 or 9?) proudly announced. They’d ridden downtown before for another occasion.

Seeing this duo made my day. It got unmade a bit after a nice long quiet bit on West Marginal Way with more people biking than driving that stretch, as is usually the case on a Sunday. I ran into the corner where Seahawks fans had decided they could park in the bike lane. So when that same father/son pair came along they were forced out of the bike lane to get around the cars. Just north of this drivers had pulled up over the curb onto a grassy space under SR99–more “hey, no one is charging $40 to park here” improv–and as they got out they walked in the bike lane since there’s no sidewalk or place to walk if people have parked on it….

So I knew what to expect when I got into Pioneer Square: More people in cars laboring under the delusion that if they drive toward the stadium, surely a parking spot will magically open up for them and if they pull into an already backed-up intersection as the light is turning red it’s okay because they don’t really take up space, or it will fold to let them in, or something. That’s not actually how physics or geometry work, however. Boy, was I glad I was on a bike since I could actually keep moving toward my destination.

As could the many people wearing Seahawks gear I saw riding bikeshare bikes of all hues toward the stadium. Back to feeling great after my internal gritching–very cool to see people taking advantage of the great mobility bicycles provide in a downtown.

And then on to the caffeine. What a serendipitous find Monorail Espresso on Pike was! Baby Woman picked it primarily because it was open on Sunday and close to the 5th Avenue Theater. When I rolled up and saw two bike racks I was already happy.

Then it turned out to be absolutely fantastic with the best mocha I’ve had in a long time made with real chocolate scooped out of a tin, not some faky powdery stuff. For a tiny place it has lots of outside seating complete with a live flower arrangement. Fun graphics and pictures posted on the windows and a wonderful older gentleman making our super-duper coffees added to the ambiance. When I got home and looked it up I learned it’s even got its own Wikipedia entry, famous for being the first espresso cart in the world (before it moved into its little window walk-up). I got #coffeeneuring #4, a new favorite coffee place, and a link to Seattle history all in one stop.

From there the day got even better with an amazing, moving, incredible, can’t-miss performance of “Ragtime.” So emotionally draining, powerful, incredibly topical, a cast bursting with talent in every role. Everyone in America should see this show right now. Go. Go now.

As if all that wasn’t enough we had a delicious vegan dinner at Veggie Grill. By this time the sun was out and my ride home after dinner was lovely (and the Seahawks fans looked very happy with their 41-38 victory over Houston).

Between this and Saturday’s beautiful ride with Eric Abbott I have won at weekending.