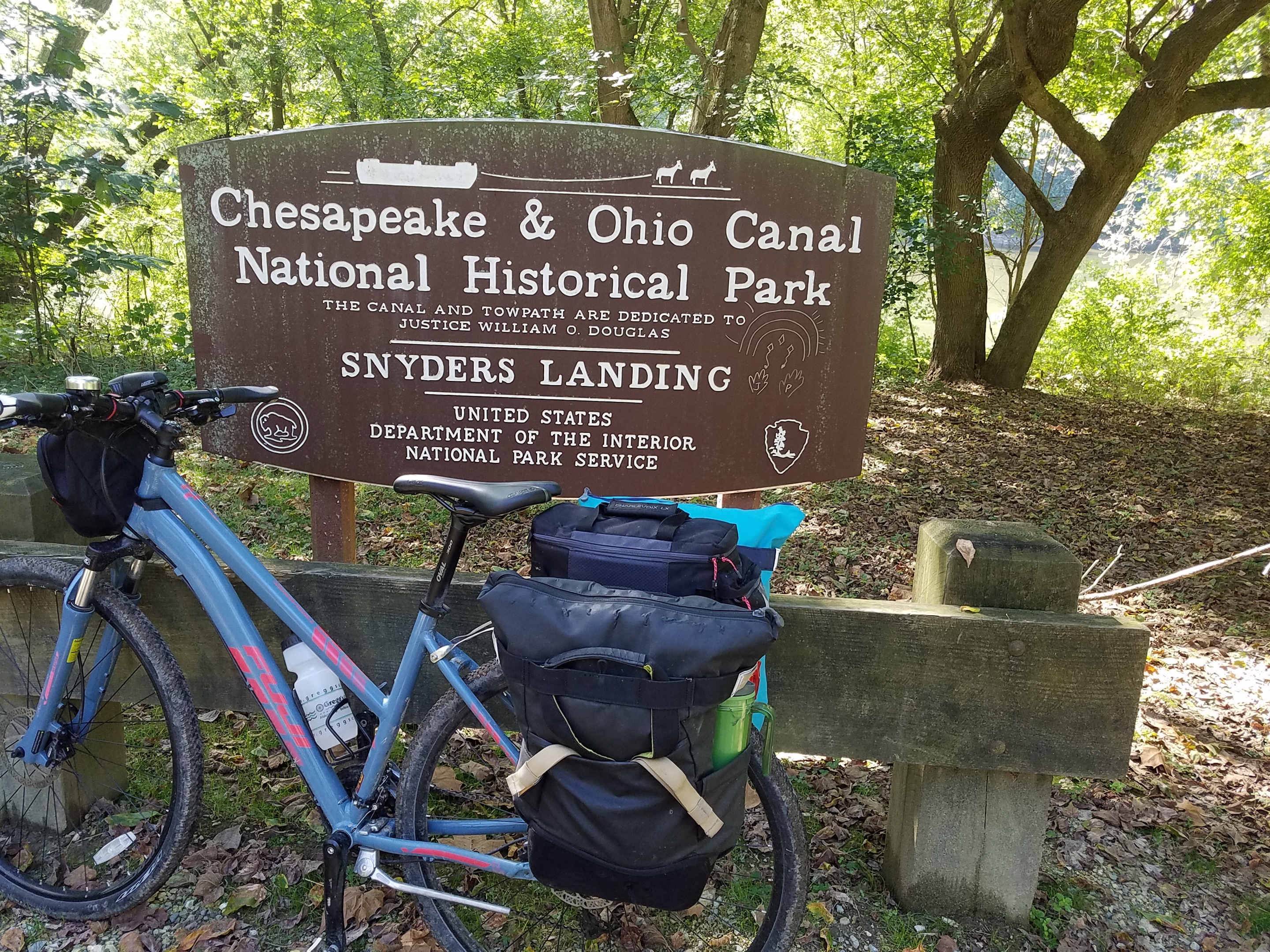 Lest you think I’m exaggerating the shaking and baking on the C&O, today a bolt fell out of the rack on my bike, having vibrated loose along the way. Luckily we were close to Harper’s Ferry and the bike shop/general store had something that fit. That’s my first mechanical issue of any kind. Eric had a couple of flats earlier and had to tighten a connection on his bag today, but we’ve been surprisingly trouble-free, considering the rough ride.

The C&O mileage is definitely more work than the Great Allegheny Passage mileage. The vibration has my hands falling asleep a bit so every so often I take one hand off the handlebars to shake it a bit, then the other, trying to time these moves so I have full control of the bike in the tricky spots.

And there are plenty of these tricky bits despite it being a flat trail. Fallen leaves on top of an uneven surface hide plenty of surprises lying in wait, from rocks to tree roots to those gluey lingering mud patches. In some places a bit of the side of the trail has fallen away, leaving a vee to be dodged or you’ll be off the side (and in some stretches this would mean you’d be in the Potomac after a tumble down a steep bank). I’d never complain about sunshine after all those wet miles early in the trip, but dappled sunlight through the trees adds to the challenge of seeing and responding in time.

I very definitely have to stay in the moment and mindful while I ride–daydreaming could be my downfall in these conditions. We’ve come up with little games and catchphrases along the way that pass some of the time. One was “Mysteries of Pennsylvania”–things we’d see again and again that called for an explanation. These included heaps of leaves along the trail that looked deliberately piled up–but who would do that in the middle of the woods?

Today’s game was “Sticks of the Potomac.” These sticks come in all sizes and levels of sneakiness. Little ones catch in the chain or crank arm, hitching a ride, making various sounds, and sometimes requiring a stop to pull them out. Bigger ones thwack your shin if you ride across them at the wrong angle. Really sneaky ones hide overhead like a logger’s widowmaker waiting to drop on you. More than once we stopped to pull bigger ones off the trail. Then there was the downed tree we had to climb over. We figure some of this is the aftermath of the storm that drenched us.

When we come out of the woods after many miles of just the sound of our tires crackling through the leaves (and sticks) and occasional bird calls, traffic is startling. We have gotten utterly spoiled by the complete separation from motor vehicles interspersed with towns that welcome riders and I want more-more-more. We’ve already started researching for next year’s trip.

Along the way we’ve seen plenty of squirrels, some chipmunks, and several deer. Yesterday Eric spotted a box turtle in the path and moved it to the side so it wouldn’t get ridden over; we then pedaled on joking about how mad the turtle was if it had been trying to get to the other side of the trail. Today’s totally cool wildlife sighting: a fox that stopped to look at us, then sprang across and off the trail.

Yesterday we rode Williamsport to Shepherdstown. This stretch included some really stunning (and somewhat scary) stretches on the very edge of the Potomac. Coming down a slight slope in shifting gravel patches toward an outside bend with absolutely no fencing makes for an exciting moment or two. Then we got long stretches that had been paved and had a curb–more “terra pava” to give us a break from the bumps.

Today we rode 18 miles to our hardware/coffee stop at Harper’s Ferry, where you have to carry bikes up a spiral staircase to get to the bridge that takes you to town.

Then we continued on to White’s Ferry, where we caught a tiny cable-towed ferry across to Leesburg to spend the night. We’ll head back across the state line to resume pedaling tomorrow to the marker at mile 0, then head across the Potomac one more time to reach my brother’s house in Falls Church for a quick visit before flying home.

Weather: Cool and breezy to start the day, warming to blue skies.