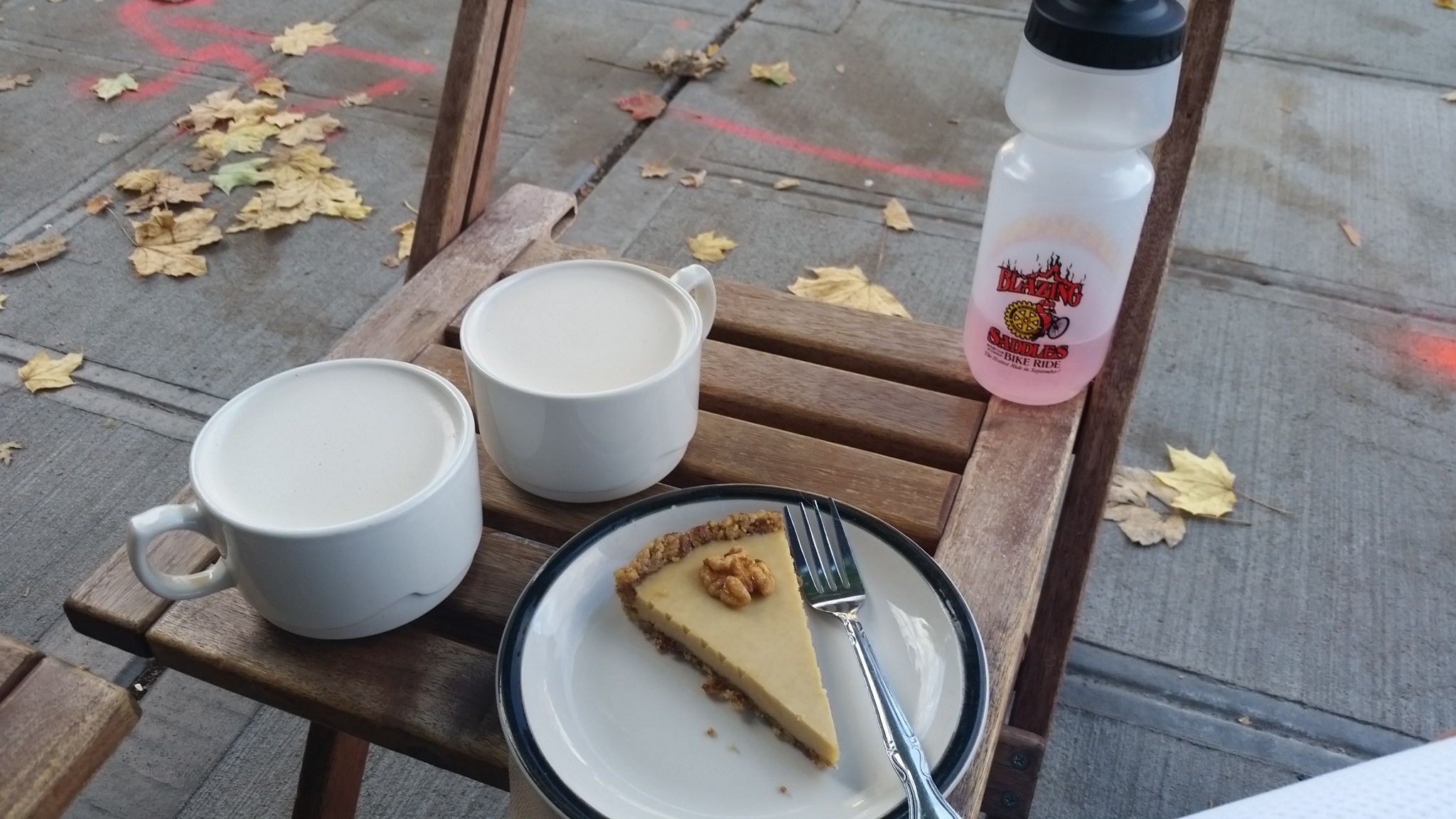 When I participated in the coffeeneuring challenge back in 2011 I didn’t realize it was the first year for the challenge posed by bike blogger Chasing Mailboxes, whom I had discovered in my quest for women’s bike blogs.

Nor did I have any idea that the term itself had been coined by Joe Platzner, a randonneuring rider who served on the board of my state’s nonprofit advocacy organization — the one I now head as executive director. Small world!

So here it is 3 years later. If memory serves (it doesn’t always), I rolled successfully through coffeeneuring in 2011. In 2012 I was just a couple of months into the new job and barely took weekends off. For some odd reason 2013 felt quite similar.

This year is shaping up nicely for weekend treats outings, though. A coffeeneuring blog post on the Washington Bikes site got some people rolling who hadn’t heard of the challenge before. I put together a Storify version of the Washington state social media #coffeeneuring action over on the WA Bikes blog.

Here’s my own progress report just past the midway point.

#1, Oct. 4: Cafe Solstice in Seattle’s University District. My usual caramel latte. On a fairly busy street but one that gets lots of bike traffic and has tons of students walking around, so drivers seem fairly used to bicyclists.

#3, Oct. 12: Zoka Coffee, another University District stop, another caramel latte. This coffee shop is absolutely huge – tons of room if you have a good-sized group that wants to head somewhere. Bike rack, quiet side street, close to Counterbalance Bicycles on the Burke Gilman Trail.

#4, Oct. 19: Chaco Canyon Cafe — in an emerging pattern, yet another destination in the University District, this one a cafe known for its vegan, gluten-free, and organic goodness. Sits at the intersection of NE 12th and 50th NE, near the parallel northbound 11th and southbound Roosevelt with their bike lanes. Bike rack. Dedication to organic that goes beyond the usual — they make the organic and non-toxic cleaners they use throughout. In a break with my usual order, I had a chai and a piece of orange ginger tart. (Ginger was very dominant in this — don’t order it if you don’t really, really love fresh ginger.)

So what is it with all these U-District coffee shops? Besides the obvious high density of coffee shops to be found anywhere lots of college students pull all-nighters, it’s a nice ride of around 5 miles each way to get there from our house and it’s on the way to/from other stops.

Sweet Hubs and I already have a standing tradition that we have a date on Sundays and it often (usually) involves our bicycles, so coffeeneuring fits right in.

Cafe Solstice: Chosen coming back from going to the Theo Chocolate tour (a must-taste if you come to Seattle — fair trade organic dark chocolate peanut butter cups!). We’d actually tried to stop at the Solstice that sits right on the Burke-Gilman Trail in Fremont but they were closing as we walked in.

Zoka: That one was a just-because, chosen because other coffeeneuring Seattleites had gone there the first weekend and I wanted to check it out. HUGE coffee shop!

Chaco Canyon: A favorite for its organic, vegan, gluten-free goodies (not that I’m either of the latter two but I’m a vegetarian), and it was on the way back from a run to Trader Joe’s.

I don’t figure I have any problem hitting 3 more coffee shops in the next 4 weekends, given that my fondness for bicycling and for drinking coffee are in a dead heat with reading for favorite things to do.

With 4 weekends left you can easily catch up and add coffeeneuring to your list of bike challenges successfully conquered. You can do it just-because or you can go for the recognition and prizes.

My prolific tweeting about coffeeneuring: