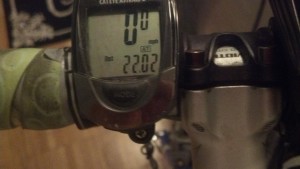 I believe I’ve landed firmly in the “tracking” camp, after a few moments of Zen clarity about non-attachment, the joy of bicycling, living in the moment, and letting go of a very Western mileage-as-accomplishment attitude.

I like to record my bike mileage. I don’t go all-out intense/obsessive (at least not in this arena). I just like to know.

A serious bike training/racing person like, say, my Sweet Hubs keeps tabs on an impressive amount of data: weather, temperature, wattage, sleep patterns, calories consumed relative to calories burned, weight, body fat percentage (definitely NOT on my list), how many reps of which type of interval, hours of base miles on the trainer or on the road in Zone 2, race results relative to training intensity beforehand, year-over-year comparisons. . . . Can you tell he got his master’s in engineering/technology management with a heavy emphasis on process improvement?

What I do track:

I wear a Fitbit and it prompts me to walk a bit more than I otherwise would, but so far I’m not recording steps in my old-fashioned health journal that involves writing things down. With a pen. On paper.

I let the Fitbit software do its thing and every so often I get that little squeeze of the wrist and happy dancing dots that tell me I reached 10,000 steps. This usually involves a trip to our nation’s capitol or suchlike — something with lots to look at and miles to walk.

Oddly enough I don’t use MapMyRide or any of the other bike mileage tracking software very often. For one thing, running an app continuously eats my phone’s battery as if it were dark chocolate with sea salt. (Oh, did someone’s craving just show up?)

I’m also usually less interested in where I rode, exactly, than simply how far. If I make some mistakes in my routing and loop around a few extra blocks that’s a good thing by the mileage standard but looks pretty goofy on a map of the route ridden.

A round-up of posts on the whole tracking/mileage/box-checking gig here and in my other blogging spaces shows my evolution from tracking to not tracking and back again over the years.