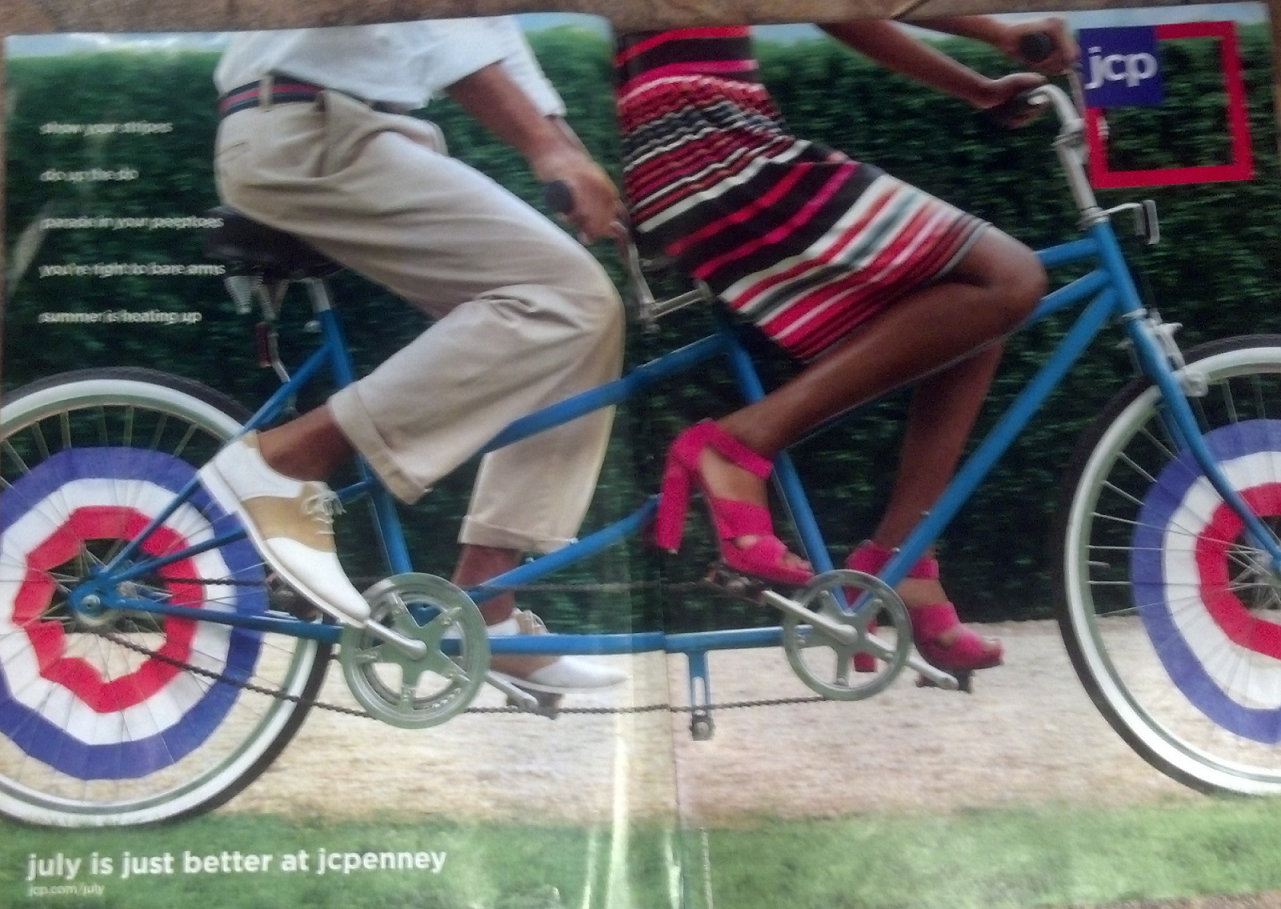 This print ad in a major glossy beauty magazine is an example of using bikes to sell an image, a lifestyle, and something other than bikes. I'm okay with that.

Have you been bikewashed, and did it feel good? More to the point, does it do some good?

I’ve been contemplating the bikewashing concept ever since Elly Blue highlighted it in a post last summer.

Velouria over at Lovely Bicycle also did a round-up of bike images on product labels that you might look at for another take on what bike images are meant to suggest to a potential purchaser.

I’m not digging into the environmental profile of every company I mention below so I’m not directly discussing bikewashing as Elly defines it—just the use of bicycle images in advertising to sell other things.

I’d say that the notion that bike images are being “used” is actually—surprisingly—an auto-centric view (sorry, Elly!).

How many ads use an image of a car that has nothing to do with the actual product being sold? Plenty. Because we’re all, every last one of us—bike advocate or not—acculturated in a society where cars are so taken for granted we don’t even notice their images or think of them as part of the sales pitch.

Cars and trucks are portrayed in advertising as a part of everyday life because they are. They’re also used to convey freedom, power, patriotism, manhood, wealth, convenience, family time, getting away from it all, and scenic beauty on terrifyingly windy roads with majestic snow-capped mountains or crashing surf somewhere nearby–images which reflect the reality of driving in urban traffic about as much as those ads for beer that suggest that drinking beer will make you thin, beautiful, and good at beach volleyball played solely with other extremely attractive people.

Ads feature a carefully balanced mix of genders, ethnicities, and ages (depending on the product being sold) because at some point, advertisers caught on that leaving people out signals that you don’t want their business. Gaining everyday placement in ads, while it might seem shallow, has paralleled societal gains for everyone who now shows up.

Once upon a time, the people with the money making the ads couldn’t see what wasn’t there.

The people being included in ads now are part of the societal norm that can’t safely be ignored. They’re mainstream. They’re a target demographic. I can tell you for sure that the TV world of my youth didn’t feature the equivalent of ads showing people who love a particular cell-phone service because it lets them call their parents back in India or Mexico, but those ads run all the time on Seattle cable right now. That tells us something about the place of immigrants in U.S. society.

I’d also venture a guess that ads lag behind what’s really happening in society because big business is fundamentally cautious, so whatever they’re showing is less than what’s really out there.

Thus I think of it as a really, really good thing if directors of ads for everything from canned green beans to online stock-trading sites to competing cell-phone services put bikes in the ads. Bikes should be fully as ubiquitous as cars in the images and metaphors used everywhere—in ads, movies, books, popular songs, videos on Vimeo and YouTube, Flickr and Pinterest collections, and photos on Facebook with big-type captions that we’re supposed to find irresistible and post on our own walls—if we are ever to establish bikes as firmly in the mainstream of transportation as cars are today.

I’m also particularly stoked to see the number of ads in which the bike is associated with a woman rather than a man, implying that both genders ride bikes in roughly equal numbers (which isn’t the reality yet in the United States). In fact, based on my unscientific TV ad sample women ride bikes more than men, if producers of ads are any measure.

I started compiling a list of ad examples using a methodology that, while not scientific, was certainly random. If:

1) an ad ran during a show I was watching (this means it’s in rotation on shows like Law & Order, NCIS, or Criminal Minds),

2) I spotted a bike in an ad when it wasn’t the focus of the product being sold, and

3) I thought about this post topic in that moment, then

4) I did a quick search to see if I could find a visual representation of the ad to share and saved a note. (In passing: Dear ad agencies and businesses they work for, if you paid a bunch of money to produce that ad why on earth didn’t you put it up on YouTube so I could find it? Did you know that’s free?)

Random bike appearances where the bike has nothing to do with the thing being sold:

Car appearances in ads that aren’t for cars themselves do include ones in which the car actually has something to do with the product, like the Edible Arrangements ad that shows their delivery van pulling up at the end of the spot.

Then there are ones like an ad for Delsym cough medicine. Cough medicine has nothing to do with cars, right? But people are shown walking and in a car with cough drops falling from above. (I’ll avoid suggesting that bicyclists are healthier and thus don’t get sick as often as drivers. Or—whoops!—I won’t avoid making that suggestion after all.)

A person is shown in a car in this ad because a car is one of the ways all these good-looking, tastefully accessorized people get around. So where’s the bikewashing when you need it?

Bottom line: The more bikes I see in ads the happier I get. I don’t care what else they’re selling—they’re normalizing bicycling.