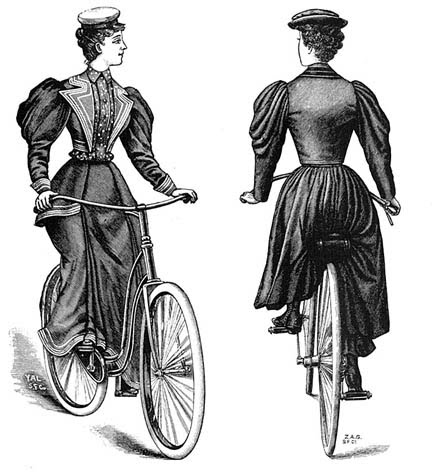 After the post with a round-up of links to the connections between women and biking, I thought you might enjoy a taste of the writing of those long-ago days. Here’s an excerpt from The Century Illustrated Monthly Magazine (Volume 54, May-October 1897), “Dangers and Benefits of the Bicycle” by A.L. Benedict, MD (who apparently had quite the fondness for incredibly long paragraphs and I left them as they were in the original).

SPINSTERS IN THE THIRTIES.

The benefits of the bicycle are to be noted particularly in the case of women who have passed the heyday of youth and have not yet reached the calm of middle life, but who are passing through a period of mental fermentation and physical irritability of varying degree according to their social sphere, temperament, and habits. The matron with engrossing and for the most part pleasant cares may slip from youth to middle age with scarcely a realization that the glamour of the former is waning, and without the physical reflection of a purely mental disturbance. In some respects she is more prone to actual organic disease than her unmarried sister, but it is the latter who is especially liable to mourn over the lost gaieties of younger days, to feel herself becoming less essential to active life, and, in turn, life becoming less endurable to her. The spinster who is an integral part of some pleasant household, or who is born to that class of society which has money and leisure for making a business of pleasure, may also find growing old a tolerable, if not actually agreeable, process. But it is the solitary female, the one who commands the gaieties of life only so long as she can keep white hairs and wrinkles from appearing, who has not the prosaic but necessary basis of philanthropy, of social activity, or the various phases of new-womanism, who somewhere in the third decade of life realizes that the evil days have come, and the years when she is forced to say, «I have no pleasure in them.» Teacher, stenographer, seamstress, wage-earner in whatever field, or the unwilling parasite on some struggling relative, she becomes the prey of mental yearning and dissatisfaction, and it is little wonder that actual disease follows. Life, irksome enough in health, becomes doubly so now; and the two factors, mental and physical suffering, act and react on each other in a vicious circle. The manifestation of the nervous state of such a woman may localize itself in some one organ or apparatus; some special form of neuralgia may set in, or the supply of nerve-power to the stomach may be so deficient that, without organic change, a serious dyspepsia ensues, or any one of a number of other organs may be similarly depressed in function, singly or in association. Such women are particularly apt to fall into the hands of the quack who assiduously circulates a list of questions suggesting complaints which the victim will imagine, if she does not already possess them. Even if the patient consults a regular physician, the result is not satisfactory to either. The particular symptom complained of may be relieved, but a relapse occurs as soon as medicine is discontinued. General tonics are tried, but the patient fails to reach the point of permanent good health. Something is lacking, and the wise physician very soon realizes that the lack cannot be supplied from the drug-store. To such patients the bicycle is a blessing. The woman who would not—yes, could not—muster courage to walk a mile in familiar and uninteresting streets, will gladly put forth the same amount of energy in pedaling three miles to reach a park or the real country; and once there, the temptation to further exercise is irresistible.

It may be an open question whether the bicycle  is destined, as some enthusiasts claim, to revolutionize the social life of our people; there is no doubt that it can furnish an excellent substitute for ordinary social occupations in the class of women referred to as lacking in this element of worldly pleasure. The bicycle  is more than a vehicle: it is almost as much of a companion as a horse or a dog, while the exhilaration of rapid motion, the accessibility of charming bits of nature, the mastery of time and space, afforded by this steed of steel, more than atone for social companionship which depends on no deep-seated affection.

It would be a mistake to suppose that the bicycle is the much-needed mental and nerve tonic of the poor woman alone. There is an opposite class of patients who, not being obliged to work, are simply too lazy to be well, and who fall into the loathsome habit of invalidism. Some—by no means all—of this class can be appealed to through the bicycle, and restored to a natural and healthy interest in life.