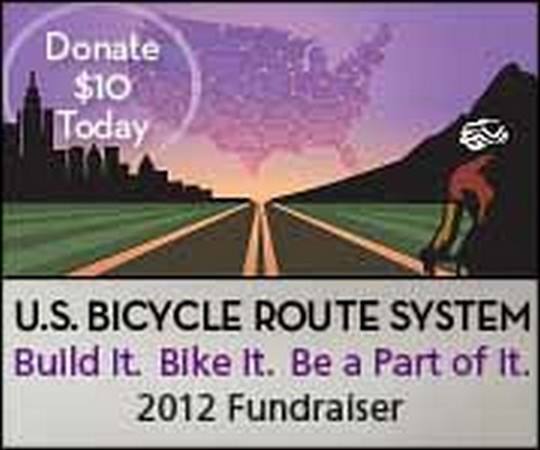 May is National Bicycle Month and it’s also the third annual Build It.

Bike It. Be a Part of It. fundraising campaign for the U.S. Bicycle Route System (USBRS). The campaign kicked off May 1, 2012 and runs through May 31. What better way to celebrate Bike Month than by supporting the creation of a national system of cycling routes?

Here are the details:

The U.S. Bicycle Route System is a visionary project similar to the national and international cycling systems blossoming across the globe. Adventure Cycling is working with dozens of state agencies, national organizations, nonprofits, volunteers, and the US Congress to realize this vision.

Can you give $10 to help build the largest bike route network in the world, encompassing more than 50,000 miles?

You can already see the effects of last year’s USBRS campaign:

I have yet to go on any long bike travel but the lure of the open road does beckon. I’d sure love to take that ride on a route that’s signed, supported, and serviced to make it a better experience!

And imagine the benefits for small towns that will get stops from bike visitors who wouldn’t bother with those towns if they were burning carbon instead of calories zipping past on the interstate.